The parents of John Batman, the founder of Melbourne, Victoria, Australia:

On 20 December, 1795, William Bateman and his brother-in-law, William Mobbs were charged with stealing 600 pounds (272 kg) of Saltpetre, valued at £48, from Mr Edmund Hill, Esq. (the operator of the Powder Mill).  Incidentally, Saltpetre (Potassium Nitrate), is the oxidising ingredient of “Gunpowder”.  Sulphur and Charcoal being the fuels to complete the recipe.

It was alleged that Bateman had planned organised, stored, processed and traded the Saltpetre during the period of the 14th April 1795 to the 19th December, 1795.

Mr Hill stated that whilst compiling a stock-take, large quantities were found to be missing.  The quantities allegedly missing were:  1,120 pounds (508 kg) in November and 1,455 pounds (660 kg) in December.  The Saltpetre produced at the Hill Powder Mill used a unique process that no other Mill in the Kingdom used; as it was exclusively produced for the government of His Majesty’s King of England, George III’s Magazine.  The cakes of Saltpetre for His Majesty’s Magazine were exclusively packaged and labelled, including the weight.

A Mr Feilding, swore at the trial that William Bateman had assisted William Mobbs in obtaining and storing the Saltpetre cakes.  William Mobbs, Bateman’s brother-in-law, had arranged to obtain the Saltpetre by entering through some missing palings at a back fence location, near the coal-house, at the Powder Mill owned by Mr Edmund Hill.  On this occasion, they carried out about 110 pounds (50 kg) of cakes and transported to a storage shed, located near Bateman’s home.  The shed was allegedly located in Essex-Passage – just under a kilometre away from Bateman’s home.  They allegedly then went on to Bateman’s home where Bateman asked Mobbs to come upstairs to settle.  Feilding had received one guinea for his assistance.

Interestingly, Feilding was exonerated from being charged for giving his account of the crime.

William Bateman, at the age of 30, was found guilty by the jury and the Justice sentenced him to 14 years transportation, despite calling 9 character witnesses.

William Mobbs, aged 25, was also found guilty and was sentenced to 7 years transportation having provided only 5 character witnesses.

The young family boarded the transport ship, ‘Ganges‘ at Portmouth, England, on the 10th December 1796 – destination:  Port Jackson – a young convict settlement, just eight years old, located thousands of miles away across the seas . . .  William Bateman travelled as a convict.  It is believed that his wife, daughter and son were awarded free passage, as was often the case at that time . . .  one could only imagine the apprehension, the fear and insecurities of the young mother:

– on her way to a land unknown

– a land without civilisation

– with no possibility of returning . . .

They arrived at Port Jackson on the 2nd June 1797.

The Batman family first resided and worked in the area around what is now known as George Street, Sydney.  William, a tough, energetic and hard-working man, must have worked and saved to good effect as, in the early 1800’s, the family was able to move into a small wattle-and-daub cottage of their own, at what is now known as 64 Macquarie Street, Parramatta; William and Mary living there until their passing. 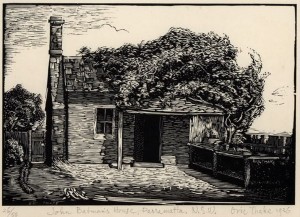 By 1810 (the year his father’s sentence expired) the tiny cottage in Parramatta housed a growing and thriving family.  William 44 and Mary 39, Maria 14, Robert 12, John 9, Henry 7, William 4 and Charles 2.  One can only imagine a happy environment with strong, healthy children, enjoying the freedoms of the great outdoors.

William Bateman later changed his family’s name to Batman – possibly to remove any stigma and shame of his criminal past ? . . .