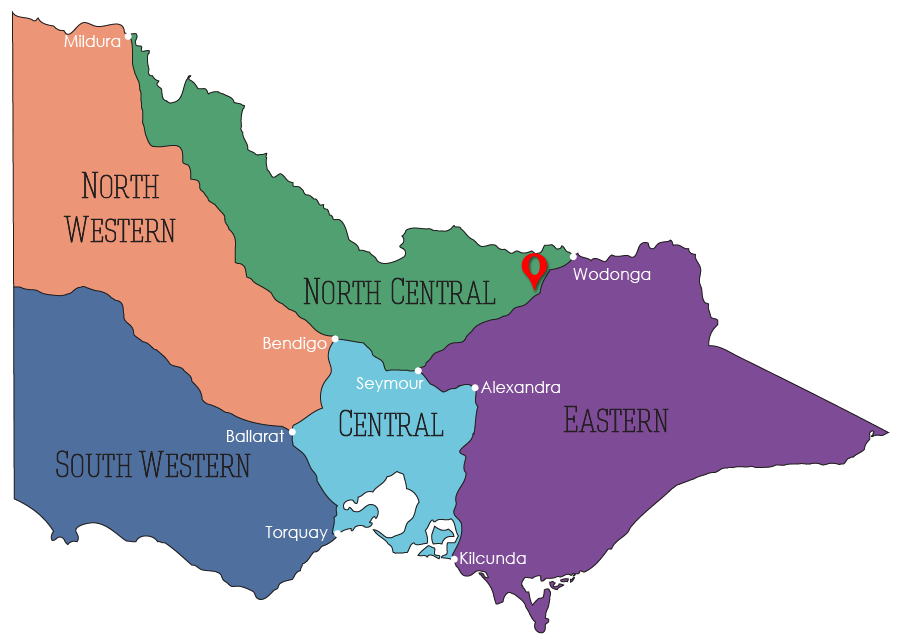 At least twenty Aborigines were reported to have been shot and killed by George Faithfull and his men during a six hour battle at Wangaratta, located in the north-central region of Victoria.  The battle was instigated in retaliation to the murder of eight of George Faithfull’s men in the April of 1838 . . .

” . . . In 1838 a convoy of stock belonging to Mr. Faithfull, whilst en route from New South Wales to Melbourne, was attacked near the Ovens by a mob of two or three hundred blackfellows, and eight out of eighteen white men in charge, murdered.  Several other outrages of a similar, though not so serious a kind, were committed on the Goulburn, the Ovens, the Murray, and at other places; and for some years collisions between the blacks and the whites occasionally occurred.  Aboriginal aggression, as a rule, is said to have led to the disasters, though there can be little doubt that the white stockmen and shepherds not infrequently provoked reprisals, and fatal retaliations were often made on both sides . . . “

On the 29th July 1853 His Excellency Lieutenant-Governor La Trobe addressed a circular letter to a number of the remaining early settlers (noting that many had already passed away by this time), requesting information as to the time and circumstances of the first occupation of various parts of the colony of Victoria, Australia.

The following transcript of the letter from George Faithfull in response to Lieutenant-Governor La Trobe’s request, provides an insight into the circumstances leading up to the battle at Wangaratta and of events and issues that ensued . . .
.

LIEUTENANT-GOVERNOR OF THE COLONY OF VICTORIA.

Your Excellency’s letter of the 27th July I beg respectfully to acknowledge, and, as far as it may be within my power, I will endeavour to give your Excellency as clear an account, as my memory at this distance of time will admit, respecting the first settlement by the white man of the land lying between the Murray and the Broken River.  It was in February 1838, that I first determined to remove my stock from the colony of New South Wales to the famed land of Port Phillip.

It was known for years prior to this time that much fine land lay in this neighbourhood, and extended from the Murrumbidgee to the Bay of Port Phillip.  Hume and Hovell were the first discoverers of this fine country, but Sir Thomas Mitchell, some years afterwards in tracing down the Darling, opened up the great country to the westward, which gave the stimulus to the proprietors of stock in New South Wales to migrate with their flocks and herds from a land at that time suffering from severe drought, “unto a land which is the glory of all lands.”

Many persons and numerous flocks and herds were on the line of march when I was, but none tarried or turned to the right hand or to the left; all were hastening on to the lands so highly pictured by the discoveries before mentioned.

When I arrived at the Ovens, I knew from Hume’s description that there were plains, called, after the former Surveyor-General, Oxley.  I determined to turn out of the beaten road and visit Oxley Plains, where I finally determined upon leaving my horned cattle, sending on my sheep to the finer lands spoken of by Sir Thomas Mitchell.  It was at this juncture that I sent on my brother’s sheep, under charge of his overseer, to the Broken River to await my coming up.  Unfortunately, within a few days after their arrival there, they were attacked by the aborigines, many of his men murdered, the stock scattered through the country, and about 200 worth of property then in the drays taken away.

My brother having arrived shortly after the massacre of his men and destruction of his property, we determined, for the sake of more fully protecting each other, to settle on the Ovens.

Some few months passed on, when I had Messrs. Bowman, Reid, Chisholm, and Docker as neighbours.  The country was left to us for some years in consequence of the hostility of the blacks, which became so unbearable that I could not keep shepherds, although well-armed, without employing a horseman, in addition to myself, to keep continually perambulating the woods lest the natives might cut them off.  During my employment in this way my cattle were destroyed in numbers within the short distance of only six miles from my hut.  I once found fourteen head of slaughtered cattle in one pond of water.  They had been driven in by the natives, it being an ana-branch of the river, and from the depth of the water and the boggy state of its banks they were destroyed with the tomahawk in endeavouring to get out.

Thus I and my men were kept for years in a perpetual state of alarm.  We dared not move to supply our huts with wood or water without a gun, and many of my men absconded from my service, throwing away their firelocks, and in some cases destroying the locks and making them wholly useless from sheer terror of the blacks.  This may appear too absurd for belief; nevertheless, it is a fact.  At last, it so happened that I was the means of putting an end to this warfare.  Elding with two of my stockmen one day quietly along the banks of the river, we passed between the ana-branch of the river itself by a narrow neck of land, and, after proceeding about half a mile, we were all at once met by some hundreds of painted warriors with the most dreadful yells I had ever heard.  Had they sprung from the regions below we could have hardly been more taken by surprise.  Our horses bounded and neighed with fear old brutes, which in other respects required an immense deal of persuasion in the way of spurs to make them go along.  Our first impulse was to retreat, but we found the narrow way blocked up by natives two and three deep, and we were at once saluted with a shower of spears.  My horse bounded and fell into an immense hole.  A spear just then passed over the pummel of my saddle.  This was the signal for a general onset.  The natives rushed on us like furies, with shouts and savage yells; it was no time for delay.  I ordered my men to take deliberate aim, and to fire only with certainty of destruction to the individual aimed at.  Unfortunately, the first shot from one of my men’s carbines did not take effect; in a moment we were surrounded on all sides by the savages boldly coming up to us.  It was my time now to endeavour to repel them.  I fired my double-barrel right and left, and two of the most forward fell; this stopped the impetuosity of their career.  I had time to reload, and the war thus begun continued from about ten o’clock in the morning until four in the afternoon.  We were slow to fire, which prolonged the battle, and 60 rounds were fired, and I trust and believe that many of the bravest of the savage warriors bit the dust.

It was remarkable that the children, and many of the women likewise, had so little fear that they boldly ran forward, even under our horses’ legs, picked up the spears, and carried them back to the warrior men.  We at last beat them off the field, and found that they had a fine fat bullock some of it roasting, some cut up ready for the spit, and more cattle dead ready to portion out.  The fight I have described gave them a notion of what sort of stuff the white man was made, and my name was a terror to them ever after.

I picked up a boy from under a log, took him home and tamed him, and he became very useful to me, and I think was the means of deterring his tribe from committing further wanton depredations upon my property; my neighbours, however, suffered much long after this.

The Government during all this time gave no help, no assistance of any kind, and at last threatened to hang anyone who dared to shoot a black, even in protection of his property, and appointed Protectors to search about the country for information as to the destruction of the natives.  These gentlemen resorted to the most contemptible means to gain information against individuals, whom the trumpet-tongue of falsehood had branded as having destroyed many of these savages.  This, instead of doing good, did much evil.  People formed themselves into bands of alliance and allegiance to each other, and then it was the destruction of the natives really did take place.  I, however, never troubled myself to go off my own run. I had no need of help, and had no desire for the destruction of the wretched race, but I would not undergo the same injuries, annoyances, and anxiety again for ten times the quantity of land I hold.  No sooner was all fear of the blacks dissipated than the whites became almost as great a nuisance, in edging in their applications and claims for portions of our runs (and let it be remembered that we were the first squatters and pioneers of the district).  Unfortunately, the Government gave too willing an ear to them, as we were all branded as murderers of the blacks; they readily deprived us of portions of our runs to give them to the other squatters, who were considered peaceful men, as they well might be after the war was ended.  Ours was the danger, theirs the reward.

I need hardly carry my short and necessarily imperfect account further.  Your Excellency is fully aware of the history of the squatters since.  No sooner did the Home Government give to that class an interest in their stations, for the wholesome purpose of encouraging them to open up the wild lands of the colony, to raise the wool so necessary for the use of the world at large, to make themselves comfortable, and become the purchasers of some portions of these wild lands, than the gold-digger, the ephemeral grubber of a day, sets up his claim to the right, not only of the auriferous metal in the bowels of the earth but to the grass upon the earth, and that, too, free from all restraint, tramping under foot the rights of the pioneer squatter rights gained by discovery and by conquest, and which are acknowledged by our Government.

Because the land was God’s land, made for all men to enjoy in common, therefore things in the earth and above the earth are theirs also in common ergo, the cattle will shortly be theirs, as the cattle eat the natural grasses of the earth, and breed upon the earth, and require no more tending than the kangaroo, and why should one man enjoy, monopolize, flocks and herds sufficient for thousands, because he may choose to put his brand upon them.  This is the next argument I expect to hear from these men.  Trusting that your Excellency will pardon me for inflicting so long a letter upon you, I remain, with great respect,

Your Excellency’s obedient and humble servant,