The Dugong is a large, herbivorous marine mammal that spends its entire life at sea, even though it has lungs and breathes air like any land dwelling mammal.

Dugongs can remain submerged for up to 15 minutes, however, whilst swimming, they must surface every three or four minutes – they often ‘stand’ on their tails to raise their two valve-like nostrils above the water.  From above the water’s surface, only the nose and nostrils are generally visible.

A Dugong’s large, grey, barrel-shaped body displays features that resemble a variety of species.  For example, their fluke-shaped tail resembles that of a whale, their head that of a pig, the males have ivory tusks like elephants . . .

Dugongs are often referred to as ‘sea cows’, as they graze on seagrass meadows like land cows graze the fields, however they are not ruminants and therefore must select seagrasses high protein and low fibre.  The seagrasses that make up the Dugong’s diet are not seaweeds or true grasses as the name would imply, but are actually related to lilies and orchids.  As these are flowering plants, they require sunlight, clear water for the sunlight to penetrate, and nutrients to grow.  In the Hervey Bay region, the meadows have been recorded to spread to an areas large as 2,300 km², and grow to a depth of 32 m.  However, these meadows are under threat due to pollution, silt laden flood waters, sediment from land clearing, excessive nutrient from farming and suburban gardens . . . – all of which bury the seagrasses, promote algae growth, which in turn blocks the sunlight and hence photosynthesis – resulting in the death of huge swathes of the seagrass meadows.

Dugongs are voracious grazers – using the sensitive bristles that cover their upper lips to detect the grasses.  They forage day and night, consuming some 30 kg of seagrass per day.  Hence the health of seagrass meadows are directly proportional to the survival of the Dugong . . .

Despite their massive bulk, they are graceful swimmers using their strong tails, to glide along at some 8 km per hour, however, they can swim up to 24 km per hour in short bursts.  They like to live in large herds, however, due to declining numbers, they are now often found in smaller groups of between only 1 to 3 Dugongs . . .

Dugongs are large, slow moving animals which commonly live in shallow, sheltered bays and lagoons – usually less than 5 metres in depth.  They have been know to frequent river mouths and creeks – all is dependent of the availability of seagrasses.

Dugongs are thought to live for up to 70 years.  Males and females do not become sexually mature until they reach at least 10 years of age and females are up to 17 years old.  In Australia, females become fertile in the latter half of the year, and calve from August to December.  Females produce a single calf every 2.5 to 5 years – the gestation period being some 14 months.  The babies arrive in the shallow waters of tidal sandbanks – measuring some 1 to 1.2 m in length and weighing approximately 20 to 30 kg.

A Dugong mother and her baby maintain a very close bond.  The calf is nutured and suckles on its mother’s milk for well over 12 months.  Though the life cycle and nuturing of the young resembles that of a human – the sudden, massive decline in numbers over the past 200 years, combined with their longevity and slow reproductive cycle, means that it takes a long time to replenish a dwindling population . . . 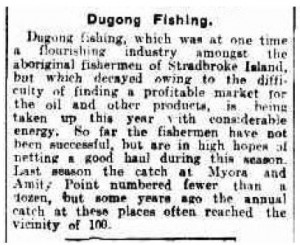 Dugongs are slow-moving and have little protection against predators apart from their sheer size, however, large sharks, saltwater crocodiles and killer whales are a threat . . .

Humans are their biggest predator.

The 19th and 20th centuries saw their numbers decline rapidly.  Sadly, as with many magnificent species, they were hunted for their oil, hide, and meat – to a point of near extinction.

” . . . A dugong landed near Urangan.  The leaner parts of this herbivorous animal’s carcass, when cured, forms appetising bacon; the fat when rendered makes a highly recommended substitute for cod liver oil.  Fishermen hereabouts in season catch big hauls of dugong in teh animals’ home waters, south of Woody Island . . . “

The 21st century sees new threats to the beautiful Dugong.  They are still hunted, they are at risk of collisions with motorboats, becoming entangled in fishing nets – exposed to declining seagrass meadows and pollution – all of which threaten their survival.

Australian waters are home to at least three-quarters of the remaining global population of Dugongs, and are a vitally important for the survival of the species.  The are found in the highest numbers in northern Australian, between Shark Bay, in Western Australia, and, Moreton Bay in Queensland.  The expansive sea grass beds of Hervey Bay and the Great Sandy Strait proudly accommodate what is believed to be the world’s largest population of the fascinating Dugong . . .