Timing of the arrival of Australia’s Aborigines will forever remain undefined.  Estimates range anywhere from some 30,000 to 68,000 years BC !!!  The enormity of this expanse in time is barely comprehensible and yet, within a few short decades of the arrival of the European to settle their great island home during the late 1700’s to mid 1800’s, Australia’s Aborigines would experience a decline that pushed them to near extinction.  Their plight continues to this very day as they battle for their ancient way of life, their land, their culture . . .

Due to the massive expanse of time that the Aborigines roamed Australia, techniques developed to date archaeological finds remain open to quarrel, however, the following evidence does support historical dates going back tens of thousands of years.  Some methods used are:  Radiocarbon Dating (though limited to a maximum age of around 40 000 years), Thermoluminescent Techniques such as ‘Optically Stimulated Luminescence’ (OSL), ‘Accelerator Mass Spectrometry’ (AMS), etc.

Charles Dortch dated the more recent find of a flint tool embedded in Tamala Limestone on Western Australia’s Rottnest Island, at some 70,000 years of age . . . 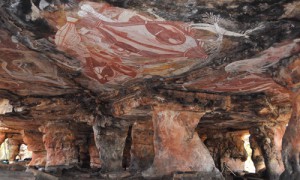 Malakunanja II is a rock shelter located some 50 km inland and 400 km east of Darwin, in Arnhem Land, Northern Territory.  More than 1,500 items have been found in this shelter, including stone tools, grinding stones, ochre, and charcoal.  Some items were buried more than 2.5 m below the surface.  Dating methods estimate that people could have been living in the protection of the rock shelter for at least 52,000 years.  The shelter also bestows faded paintings of ochre on the walls – though ochre was found in the oldest sections of the cave, it is not possible to date the drawings.

Aboriginal stone tools discovered in a quarry in Penrith, New South Wales are estimated to be some forty-seven thousand years old.

Discovered in 1974 near Lake Mungo, New South Wales – 987 km west of Sydney, the human remains found are the oldest attestation to human occupation in Australia – being estimated to be between 56,000 and 68,000 years old.  Stone tools, also found at Lake Mungo, and are estimated at approximately 50,000 years of age.

Evidence drawn from reef deposits in Queensland as well as analysis of pollens and charcoal from the Lake George Basin located in the Southern Tablelands of New South Wales (approx 30 km north-east of Canberra) demonstrate a change in fire regimes in Australia, dating back to between 70,000 and 100,000 years ago – suggesting humans were using fire to clear the lands.  Another scientific theory is that the arrival of the Aborigines to Australia lead to the extinction of Australia’s megafauna, (stories of which are preserved in the oral culture of many Aboriginal groups) by their introduction of fire-stick farming and hunting.  Dating from the remains all forms of megafauna on the Australian mainland confirm that they became extinct in the same rapid time-frame — approximately 46,000 years ago . . .  A counter-claim to this theory is that the rapid extinction was due to a change in the climate alone, however, these arguments do not take into account the fact that megafaunal species comfortably survived two million years of climatic oscillations, including a number of arid glacial periods, before their sudden extinction . . .

Just a quick recap to help comprehend how vast these timescales are – where a generation is defined as 20 years – there have been approximately 11 generations of Europeans since the arrival of the First Fleet in 1788.

Conversely, calculating at a mean arrival date of the Aborigine at some 45,000 years ago, there have been well in excess of 2,250 generations of Aborigines in Australia !!! . . .