The Commonwealth of Australian Constitution Act 1900 (UK) was amended to determine a new locality parameter, the valuation of land, as well as increase the size of the territory to 900 square miles (2,331 km²): Today, the Australian Capital Territory covers an area of 2,358 km².

Selecting a Site for the New Federal Territory 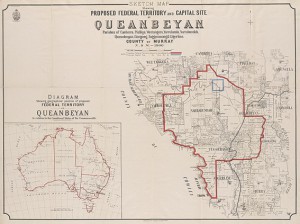 The year 1900 saw Bombala as the favourite.  By 1903 Tumut was named in favour over Bombala.  Progress stalled as the election of the 16th December 1903 took precedence.  The debate continued, another election came and went, and, in the meantime the Yass-Queanbeyan area entered the race.  Finally, on the 18th October 1909, an agreement was reached approving the Yass-Queanbeyan site together with an additional eight areas in the Jervis Bay vicinity (allocated as the port for the inland city).  Water rights were also included to ensure an adequate water supply. 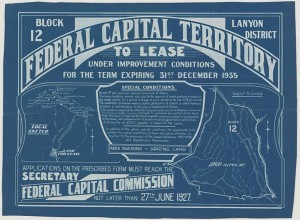 As soon as the territory had been established, an international competition was held to find the perfect design for what was to become the new capital city of Australia – Canberra.  The competition was won by an American architect Walter Burley Griffin – the drawings having being drafted by Marion Mahony Griffin.

The name, ‘Canberra’, is believed to have evolved from the Aboriginal Ngunnawal people’s word, ‘kamberra’ – which means ‘meeting place’ . . .

The name official name of the ‘Territory of the Seat of Government‘ was later amended to the “Australian Capital Territory” in 1938, even though it proved quite unpopular at the time. A number of variations to the perimeter of the territory had occurred during the 20th Century, however, the borders reverted back to the structure of 1911, and, it is anticipated that they will remain as such in the foreseeable future . . .