‘Teredo Worms’ are often referred to as the ‘termites of the sea’ – as they bore through submerged wood, efficiently undermining the wooden structure and integrity, ferociously consuming all they can find.  In the natural world, this is an important part of the ‘circle of life’, however, for man-made marine structures, the worms have been responsible for the demise of many ships, boats, wharves, jetties, dikes, etc. 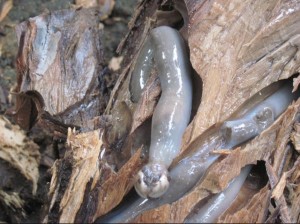 The Teredo Worm belongs to the genus ‘Teredo’ – the most notorious to man-made structures being the ‘Teredo navalis’.  In fact, the Teredo Worm is not a worm at all !!!  It is actually a Bivalve Mollusk, adapted to boring through submerged wood.

The T. navalis resembles a reddish-grey worm, with a head covered by two white, helmet-like, tri-lobed shells used to rasp away and bore into wood.  The shells are up to 2 cm longwith concentric ridges, and a hook-like process called a styloid apophysis within the shell.  The foot is also located at the head end.  At the tail end are two siphons:  an incurrent and an excurrent.  The incurrent siphon is used for respiration and feeding while the excurrent siphon expels waste, sperm or larvae.  Paddle-like pallets act as a lid to cover the siphons when not in use.  They can range from 1.5 cm to 58 cm in length and are generally around 1 cm in diameter.  A calcareous substance is secreted from their mantles, coating their burrows. Though the place of origin of the T. navalis remains uncertain, today its distribution is widespread throughout the seas and estuaries of the world.  It has been found in the Atlantic and Pacific Oceans; the Baltic, Black, North and Mediterranean Seas, and the English Channel.

Experts do agree that the naval shipworm has been spread around the world via wooden hulls of ships and driftwood, for centuries.  Whilst the shipworm can tolerate low saline levels (up to 5 ppt), they flourish at levels greater than 9 ppt.  Their optimal temperature range is 15 to 25 degrees Celsius resulting in the T. navalis being found in both temperate and tropical zones.

The species is very prolific, spawning three to four times per season whilst releasing 500,000 to 1,000,000 eggs in a single spawn !!! – noting that a juvenile reaches sexual maturity and spawns within six to eight weeks !!!

Though the T. navalis plays an important role ecologically speaking, by quickly and efficiently decomposing submerged timber; for man-made wooden, marine structures – the Teredo is a catastrophe . . .

So very many ships and boats have fallen victim to this Clam – that resembles a Worm . . .  as it burrowed into the unprotected wooden hulls – consuming the wood with the help of the bacteria that lives in their gut – slowly boring through, leaving behind critically weakened structures – honeycombed by the trails of the “worm’s” ravenous appetite – to a point where ships would literally break apart in the open ocean – often without warning . . .

Of more recent times, some examples of large scale destruction by the worm include:

Holland experienced the destructive forces of the T. navalis when, large portions of their dike system collapsed during storms in the 1730’s promoting the replacement of wooden dikes with stone.

Since the shipworm has penetrated the Baltic Sea during the 1930’s, many historic Viking shipwrecks have been attacked and compromised by the naval shipworm.

Further across the northern Hemisphere, an unknown number of wharves, piers, ferry slips and other wooden harbour structures were destroyed at a rate of one major structure per week for a period of two years in 1919 to 1921, in San Francisco Bay at a cost of hundreds of millions of dollars.  The worm still causes havoc in the area . . .

The only sure way of ceasing the destruction of the T. navalis is to replace and build all submerged marine structures with materials other than wood . . .