Nearing the end of her maiden voyage:

” . . . A very serious disaster, resulting in total shipwreck, occurred not far from Port Phillip Heads, yesterday.  The vessel in question was the Formosa, an iron steamer of 180 tons, and Clyde-built.  She left Glasgow for this port in the beginning of October, under canvas, and rigged as a three – masted schooner.  She was consigned to Messrs. Alex. Macfarlan and Co., of this city, and had on board a large cargo, consisting chiefly of bottled beer and cast-iron pipes.  The first intelligence gleaned of her off this coast was on Thursday, when she was reported as being off Cape Otway, 120 days out, and with her foretopmast gone.  Captain M’Lean, of tho s.s. Coorong, also spoke her off Cape Otway, and brought a message from her to Melbourne for a tug to be sent to the Heads to bring her up.  Messrs. Norton, Graham, and Co. quickly despatched their steam-tug Challenge to Queenscliff, to look out for the Formosa, but nothing could be seen of her.  In the course of the morning, however, it was ascertained from Captain Walker, of the A.S.N. Company’s s.s. City of Adelaide, that a three-masted iron schooner was on shore four miles south-east of Point Nepean, and rightly this was concluded to be the Formosa.  Telegraphic intelligence from Queenscliff states that she went ashore about four o’clock yesterday morning, two miles east of Point Nepean ; and as the coast there is singularly forbidding, and a fresh S.S.E. wind was blowing, it was quite according to expectation that she would become a complete wreck.  Later in the day it was intimated that’she had broken in two at the mizen, and that a great portion of her cargo had been washed ashore.  Most fortunately no lives have been lost, and the crew, with the one passenger who was on board, having landed in safety, and reached the sanitary station at Point Nepean.  When the perilous position of the vessel was known in town yesterday Messrs. Norton, Graham, and Co. at once sent another of their steamers – the Titan – to her assistance.  It has not transpired to what extent the Formosa and her cargo were insured . . . “

17 Sep 1868 → the SS ‘Formosa’ was completed and registered to George Jardine Kidston of Glasgow, Scotland 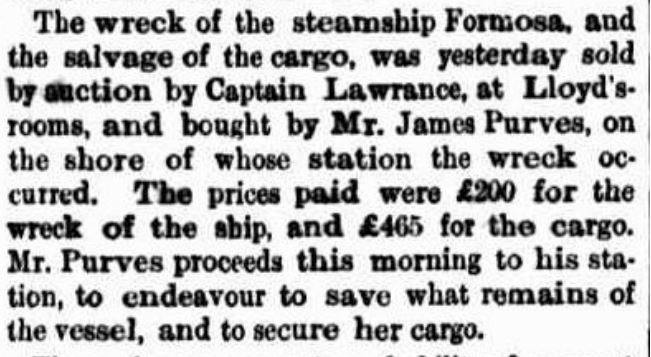 Oct 1868 → the SS ‘Formosa’ was registered to John Blyth of Melbourne, Australia

5 Feb 1869 → the SS ‘Formosa’ was stranded and subsequently wrecked off Portsea back beach as she was nearing the end of her maiden voyage – the captain was found to be at fault . . .

View other important events in the history of Australia’s International Shipping . . .