The SS ‘Charlotte Fenwick’ was a propeller driven screw steamer, built in Sydney by Walter MacFarlane Ford Snr., a legendary boat builder of Berrys Bay, North Sydney, New South Wales; for a Mr John Fenwick, who named the steamer after his wife, Charlotte.

” . . . The steamer Charlotte Fenwick, which was launched from Mr. Dunn’s yard, at Berry’s Bay, in September last, is now completed, and may be expected to commence work shortly.  She is a finely modelled vessel of the following dimensions:- Length, 90 feet ; beam, 18 feet ; depth of hold, 7 feet 6 inches, which give her a net register of 50 tons.  The Charlotte Fenwick is a screw steamer.  Her engines, which are on the compound surface condensing principle, were made by Messrs. Plenty and Sons, of Newbury, and are of 21 horse power nominal, the cylinders being of 12 inches and 22 inches, and the length of stroke 15 inches.  The Charlotte Fenwick is the property of Mr. John Fenwick, of Sydney . . . ” The SS ‘Charlotte Fenwick’ spent the next few years running a service between Sydney and the Hawkesbury River, ran excursion tours and the like until she was sold to the Carpenter Brothers who intended to increase their fleet running Victoria’s Gippsland Lakes and rivers

1889 → meanwhile, back in Victoria, the opening of The Entrance at Lakes Entrance in 1889, promised greater access to Gippsland – its riches, its lakes, its rivers and beauty – and enterprising businessmen were ready to service the trade.

The steamer Charlotte Fenwick, from Sydney, passing here on Wednesday last for Sackville, met with a mishap.  When up the river, it appears the hawser by some means got round the propeller, and thus disabled the boat.  As the obstruction could not be removed, the steam launch Binghie was sent for, and just now passed here with the Charlotte Fenwick in tow, bound for Post’s [?] Ferry, where the disabled steamer will be beached in order to clear the propeller, enabling her to return to Sydney . . . “

5 Aug 1890 → the ‘Sydney Morning Herald’ reported on this day that the Carpenter Brothers intended to use the SS ‘Charlotte Fenwick’ as a tug boat, cargo vessel, for deep sea fishing (generally between the Kent Group Islands and Melbourne) and the occasional excursion trip 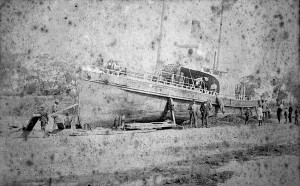 24 Aug 1890 → the SS ‘Charlotte Fenwick’ arrived at the Gippsland Lakes.  She serviced the Gippsland Lakes, Bass Strait, trips to Melbourne, etc. – as was intended experiencing many an incident along the way . . .   Being such a tough little steamer, she was repaired, recovered, refurbished, refloated . . .  – and, was sent straight back into service . . .

” . . . On Friday the steamer Tanjil, belonging to Mr Dahlsen, took refuge near the willows and the steamer Charlotte Fenwick, belonging to Messrs Carpenter Bros., but at present under charter to the Public Works department as a tug boat, etc., for the dredge Wombat, took up a position there also.  During Friday night the Fenwick was driven on to the Eagle Point road, and became stranded, and now lies high and dry on the road.  The task of slipping her into the river will be an expensive one, and will have to be borne by the Government . . . “ She was often docked at the tiny settlement of “New Works”, located just inside ‘The Entrance’, which housed the workers who built ‘The Entrance’.  The late 19th century saw the SS “Charlotte Fenwick’ servicing the Bass Strait fishing industry as well as being hired for fishing excursions.

1902 → saw the SS ‘Charlotte Fenwick’ chartered by a Mr M Walsh to run daily services in Port Phillip Bay from Melbourne to Mornington via Mentone, Mordialloc and Frankston – whilst still being chartered for fishing excursions.  Even during the coal strikes the SS ‘Charlotte Fenwick’ could loyally service her timetable, as her engines could easily adapt to wood as her fuel . . . 1916 → this sturdy little steamer continued her service until she was put up for sale in late 1916.

View other important events in the history of Victoria’s Coastal Runs . . .