George Armytage was born in Ticknal, Derbyshire, England c 1795.  He was raised in Brussels and in Yorshire and emigrated to Sydney, Australia c 1815; after studying engineering in London.  Armytage moved to Van Diemen’s Land (now Tasmania) c 1816, marrying Elizabeth Peters c 1818.  They were to have eleven children – seven sons and four daughters.

He was amongst the first to travel and settle in the Port Phillip District following the expedition by John Batman and his men in mid 1835.  By 1849 he had acquired a number of Runs, the first of which, being ‘Ingleby’ c 1836:

He and his descendants are associated with some of the grand old homes surrounding Port Phillip: 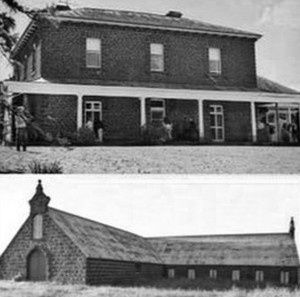 He acquired his 640 acres of pre-emptive land (land apportioned to squatters at the time) just to the north-west of the present day township of Bambra though his fencing would suggest he had squatted a much larger portion of land.  The large bluestone mansion was built on this plot he named ‘Ingleby’ c 1860.

” . . . After the party returned, my son took the sheep to the spot where he first found the track of Gellibrand’s party, and where we have been ever since. This part of the country has since been surveyed and marked off into counties and parishes. Our station, named Ingleby, is in the parish of Yan Yan Gurt, county of Polwarth. . . “ 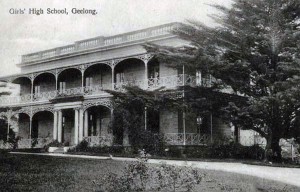 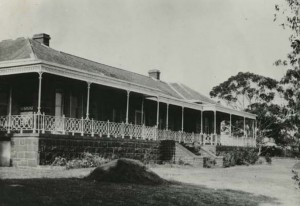 The pastoral property of ‘Wooloomanata’, built by the sixth son of George Armytage, Frederick William Armytage, c 1860.  The U-shaped, Italianate style, bluestone residence is surrounded by an intricate iron verandah of unusual design and fabrication. 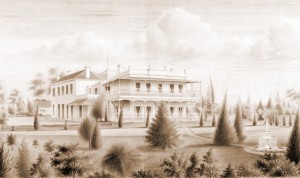 Built by Edward Eyre William in a classic mix of Australian Regency and classic Italianate style, the property change hands a number of times until Charles Henry Armytage (son of George Armytage) purchased the property in 1864.  He and his wife, Caroline raised ten children at the property and though Charles died in 1876 and his wife in 1909, the property remained in the family until 1959, when it was transferred to the National Trust.  It is interesting to note that one of the many business interests Charles Armytage had was pioneering the manufacture of eucalyptus oil – after having observed how the Aborigines used gum leaves to cure scratches . . . 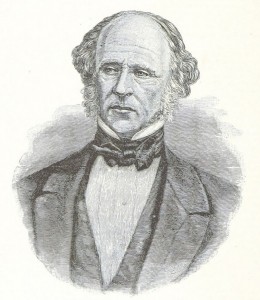 ON the 29th July 1853 His Excellency Lieutenant-Governor La Trobe addressed a circular letter to a number of the remaining early settlers (noting that many had already passed away by this time), requesting information as to the time and circumstances of the first occupation of various parts of the colony of Victoria, Australia.

The following transcript of the letter afforded by George Armytage in response to this request, provides an insight into the region and its inhabitants at the time.

LIEUTENANT-GOVERNOR OF THE COLONY OF VICTORIA.

In reply to yours of the 29th July, requesting information as to the first settlement of the country adjacent to the Barwon and Glenelg rivers:

In the first week of May 1836, I left George Town, Van Diemen’s Land, with a small flock of sheep, in the brig Henry.  Five days after embarkation they were landed at Williamstown, Port Phillip, where I found several, if not all, of the first settlers, with their flocks, all of which had been brought from Van Diemen’s Land within the five or six previous months, and which were left in charge of the shepherds near the beach until suitable runs could be procured.  I have no recollection of any serious depredations having been committed by the aborigines at this time.  The wild dogs were very numerous and troublesome, and destroyed several sheep.  Their howling at night was terrific.

While at Williamstown, a Mr. Franks and I agreed to take up a run together; Mr. Franks was to select it.  After making these arrangements, I left my sheep and shepherd and returned to Van Diemen’s Land.  About six weeks after, I received the melancholy intelligence of the murder of poor Mr. Franks and my shepherd, both of whom had been struck on the head by the blacks with a tomahawk while making a bush fence for yarding the sheep on the new run they had selected on Mount Cotterill, near the River Exe.  Shortly after, during the day, my son Thomas on riding up to assist in making the yards, found the unfortunate Mr. Franks and the shepherd lying on their faces, with the back of their heads split open.

About this time there were other murders one at Indented Head.  Captain Flat, a manager for Dr. Thomson, after being dreadfully beaten and left for dead, recovered.  Several other murders and robberies were committed by the blacks, but I cannot particularize them.  After this, my sheep were put into a flock of Judge Pedder’s, in charge of Mr. Darke, where they remained until the unfortunate circumstance of the loss of Messrs. Gellibrand and Hesse.  These gentlemen had been missing some time, and, doubts being entertained of their safety, my son, who was an articled clerk to Mr. Gellibrand, went with four or five others in search of the missing explorers in the direction where, from the information they had received, they hoped to fall in with their tracks.  After searching and following the Barwon River in a westerly direction, about thirty miles from Geelong they found the tracks of the lost party, and followed them until they reached the place where Mr. Gellibrand and Mr. Hesse had camped.  On this spot the searching party stayed during the night.  Next morning they continued following the track up the river until the country became so stony and rough that they could not trace the party further; consequently they struck off from the river towards Lake Colac; and therefore, it was at this time, and by this party, Lake Colac was first discovered, and also Buninyong, Stony Rises, and other places.

After the party returned, my son took the sheep to the spot where he first found the track of Gellibrand’s party, and where we have been ever since.  This part of the country has since been surveyed and marked off into counties and parishes.  Our station, named Ingleby, is in the parish of Yan Yan Gurt, county of Polwarth.

The eastern side of my Ingleby station was taken up by Mr. Henry Hopkins, of Hobart Town, and is now the property of his son, John Hopkins, and called Wormbete.  This property is considerably improved.  The station on the north side of Wormbete was first taken possession of by Mr. W. Roadknight, whose son is now in possession.

The station south of Ingleby was taken up by William Roadknight, and is now occupied by Mr. Thomas Vicary, Mr. Roadknight’s son-in-law.  This station is called Yan Yan Gurt.

The station adjoining this on the west was taken up by Thomas Crutch, who sold to Matthews, who sold to George Vicary, who is now in possession.  The original occupiers of the country adjacent to, and lying W.S.W. further up the Barwon River, were Messrs. Austin, Roadknight, Ricketts, Dennis, and myself, all of whom, in 1840, were removed by the Government to make room for the Wesleyan missionaries, who, if I am correctly informed, brought an order from the Home Government to occupy ten miles square of land for the purpose of maintaining and civilizing the aborigines.  This mission failed, and the land has since been sold, and let to the highest bidder. Nearly the whole of it is now in possession of Mr. James Austin and myself.  Northwest of the Mission Station was originally occupied by a Mr. Matheson, who sold to the Messrs. Dennis, the present occupiers.

The original occupiers of the land lying westerly from Messrs. Dennis, in the Colac district, were Messrs. Murray, Lloyd, Dr. Morris, Pollock, Dewing, and Captain Fyans, the whole of whom sold their right of runs, excepting Mr. Murray and Captain Fyans, in consequence of the great expenses and many difficulties they had to contend with.  About five miles in an easterly direction from Dennis Brothers, and north from Ingleby about three miles, are two small mountains, supposed to be of volcanic production.  They are named after the two unfortunate gentlemen, Messrs. Gellibrand and Hesse.  Between Mount Gellibrand and Dennis Brothers’ station is situated a station selected and originally occupied by Airey and Darnell, who made considerable improvements.  These gentlemen dissolved partnership.  Darnell sold to Airey, who has since died; the property is now rented to Messrs. Beale and Trebeck.  The station lying east of the last-mentioned, called Hesse Mount, is part of a station originally occupied by Messrs. Highett and Harding; they having separated, Highett sold to Mr. Hopkins, of Hobart Town, whose son Arthur is now occupying it.  Mr. Harding still retains possession of his half.  My son Thomas, who has been previously mentioned in this letter, lost his life by a cold caught in crossing the Barwon before there were any bridges.

I have the honour to remain,

Your Excellency’s most obedient servant,

His Excellency the Lieutenant-Governor,

P.S. Most substantial improvements, chiefly stone, have been made on nearly all the stations herein mentioned.  They are fully stocked with sheep, cattle, and horses, and there are cultivated fields well fenced, on nearly every station.  On our station there are 40,000 sheep, 2,000 cattle, and horses, &c.  The aborigines occupying the country adjacent to the Barwon River, from the sea to its source, were supposed to be about 300 in all the Indented Head, Barrabool Hills, Colac, and Yan Yan Gurt tribes.

Their chief support was fish, caught in the river in the summer and autumn seasons, and in winter and spring they depended on their success in hunting, together with the root called “murnong.”

The gentleman I expected to get information from relative to the country adjoining the Glenelg acquaints me he has given all the information Your Excellency required to Mr. Bell, ‘the Commissioner, but I am expecting this gentleman in Geelong, after shearing, when if I can glean anything further I will take care it shall be forwarded.

George Armytage died in the July of 1862 in Geelong, Victoria, Australia . . .