Details regarding the paddle steamer PS ‘Kangaroo’ are sketchy . . .  It is believed that she was built in Melbourne, c 1871, by JC Lowrie.

Records show that in the May of 1874, the PS ‘Kangaroo’ was involved in a collision with the paddle steamer PS ‘Murray’ on the Yarra River, Melbourne. 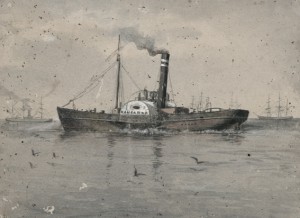 Somewhere after 1874, the PS ‘Kangaroo’ must have been relocated to the Gippsland Lakes as in 1879 she is is reported to have commenced the Paynesville to Sale run, leaving Bairnsdale on Thursdays and Saturdays . . .