The PS ‘Hygeia’ was a paddle steamer, built by Napier, Shanks & Bell, in Glasgow, Scotland, in 1890.

When the paddle steamer PS ‘Hygeia’ was built, in 1890, she was considered the largest and fastest bay steamer afloat.  She was capable of carrying up to 2,000 passengers and crew and was finished to the highest of standards.  The state rooms were lavishly adorned in polished Oak, Hungarian Ash, Walnut and Sycamore – decorated with gilded pilasters.  She would carry some 3,000,000 passengers around Port Phillip Bay in Victoria, during her career of 41 years.  The PS ‘Hygeia’ was considered far too young to be scuttled and sent to an early grave – just outside Port Phillip Heads . . .

” . . . The Hygeia has been built to order of Messrs Huddart, Park, and Co., and is intended for the Melbourne harbour excursion running.  For this she seems peculiarly well fitted, and there is not doubt she will speedily become a most popular craft.  On her trial trip, which took place early in August last, she made a run of 15 miles, attaining a speed at the rate of 22.8 miles per hour.  On this performance it is claimed for her that she is the fastest steamer afloat.  The Hygeia is a paddle wheel boat, 300 feet long, 32 feet beam, and 12 feet deep.  Her promenade deck is 260 feet long, and 64 feet over the wingwalls.  Seats are placed in the centre and alongside the sides of the promenade deck, and this part of the vessel will prove the most sought after when she has entered on her work.  There are most comfortable saloons on the main deck, handsomely fitted up, and presenting the appearance of floating palaces.  Light and ventilation have evidently been well studied.  Below the main deck are roomy dining-rooms fore and aft.  The saloons and dining-rooms are fitted up with all the conveniences necessary for the particular business in which sh is to be engaged.  Electric bells and electric lights are fitted up in convenient positions.  No detail seems to have been overlooked, while the general arrangements are all that could be desired.  The motive power is supplied by one of Rankin’s patent disconnective triple expansion engines, which are said to have peculiar advantages of the other triple expansion engines . . . “ ” . . . The steamer Hygeia, which is now on her way from Glasgow to Melbourne, called in here yesterday for coals and supplies.  The Hygeia has been built to the order of Messrs. Huddart, Parker, and Co., and is intended for the Melbourne harbour excursion running.  For this she seems to be well fitted, and there is no doubt she will speedily become a most popular craft . . “

20 Dec 1893 → the PS ‘Hygeia’ was especially hired to transport the vice-regal party including his excellency Lord Hopetoun, the Countess of Hopetoun, the premier, members of parliament and invited guests to the grand opening of the new channel linking Port Phillip and Corio Bays.  The channel measured in at 3.75 km (L) x 6.86 m (D) at low tide x 40 m (W) and was officially opened for traffic on this day

” . . . Geelong yesterday presented a very animated appearance, and the town exhibited a most festive sight on the occasion of the opening of he new channel off Point Henry.  The work of cutting the channel, which is 12,290 ft in length, 22 ft 6 in deep at low water, and 132 ft in width, was commenced many years since, and it was completed about eight weeks since, but not gazetted as open for traffic until yesterday.  The new and deep highway connection Port Phillip

Bay and Corio Bay has recently been fitted with beacon gas buoys, three white lights being on one side and three red lights on the other, and these were displayed for the first time on Monday night . . . “

” . . . A special bank and public holiday had been proclaimed, and generally speaking it was well observed, almost all of the business premises having their shutters up, whilst the employees were enjoying the rest from work . . . “

” . . . As soon as the formal introductions had taken place the company left the platform and took seats in the carriages and drags provided by the Western Stage Company and Messrs Walker and Bryant, and were driven rapidly to the Yarra-street wharf, by way of Railway-terrace, Malop and Yarra streets.  There was an immense concourse of spectators on the wharf, and the visitors from Melbourne at once proceeded on board the magnificent paddle steamer Hygeia, specially hired for the occasion by the mayor of Geelong, which already contained about 1900 ladies and gentlemen, all of whom had been admitted on board by ticket.  With flags flying from the masts, and the playing of inspiriting music by the Australia Felix brass bank, the great paddle boat left the wharf with her gay living freight of 2000.  The bridge of the steamer, usually occupied by Captain Patrick and his helmsman, was speedily taken possession of by Lord and Lady Hopetoun, the mayor and mayoress and Miss Grey, and the following . . . “

” . . . The standards of the awning of the steamer’s bridge were artistically decorated with Lord Hopetoun’s colors, gold and blue.  As the Hygeia left the wharf severy lusty cheers were given for his Excellency and Countess, and the paddle steamer having made a graceful turn in the bay headed away for the south, or rather the middle channel, followed by a gentle southerly breeze.  A clear blue sky enabled the great company on board the Hygeia to obtain a splendid view of the western and northern shores of the bay, the vessel being taken around those localities in order to give spectators a pleasing view of the bay scenery.  The members of the Geelong yacht club mustered in full force, ten well-manned boats, with all sail set, leaving their moorings prior to the Hygeia starting, under the command of Dr. Hope, the commodore of the club.  The white sail fleet formed into two lines, after passing the Yarra-street wharf, and the manœuvre produced an avenue along which the Hygeia gently steamed, and as the huge paddle boat passed the tiny craft, one after the other flags were dipped, and cheers were given, Lord Hopetoun quickly responding to the hearty greeting.  All on board the Hygeia had a splendid view of the bar as the steamer passed through the old channel, and upon arrival at the entrance to the new channel at Point Henry the vice-regal party were saluted by the gunboats of Victoria and Albert, the torpedo boat Countess of Hopetoun, and the steamer Lady Loch . . . “

” . . . A capital marine procession then took place through the channel, the vessels taking part in it being as follows:  Hygeia, Victoria, Albert, Lady Loch, Burrumbeet, Eclipse, Countess of Hopetoun, and Bellarine.  Whilst the Hygeia was slowly steaming towards Geelong a photographic view of the procession was taken by a lone photographer stationed on one of the gas beacons . . . “ The Early 20th Century → The ‘Hygeia’ successfully and safely transported passengers around the bay, without incident – many enjoying their trips immensely.

” . . . The annual bay excursion to Sorrento on Monday was “one of the most enjoyable trips on record” – the opinion generally expressed.  Light, cool breezes all day, but not wind enough to raise the light sand and dust, which in summer are the drawbacks at seaside resorts.  About 1,800 were – carried on the “Hygeia,” some 400 odd going from Bacchus Marsh and Melton districts.  A number of old familiar faces were to be seen (some who have practically patronised the trip every year) – but others were missed, notably, the late Mr. Thomas Cain and Mr. W. H. McFarland, who, from the commencement, had been enthusiastic supporters of those popular trips.  After three hours at Sorrento the return trip-commenced at 4.30 ; Port Melbourne reached at 7 ; and Bacchus Marsh at 9.30 ; everyone arriving home happy and delighted with having spent a pleasant day . . . “ However, as the ‘Great Depression’ took hold, and motor vehicles became increasingly popular for day trippers and holiday makers alike, passenger numbers on this wonderful  steamer declined – in the period 1927 to 1930, passenger numbers plummeted from over 100,000 to under 40,000 . . . 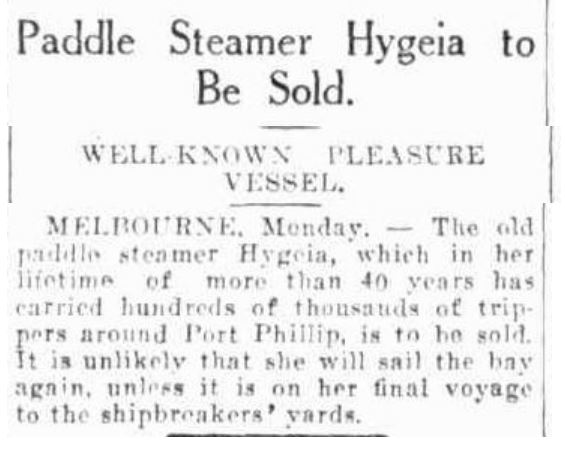 Aug 1931 → the grand lady, PS ‘Hygeia’, was not prepared to leave the bay without a fight:

” . . . When an attempt was made to sink her last August she broke away from the tug Eagle in a strong following wind and ran ashore near Rosebud.  She remained fast for 10 months, and it seemed unlikely that she would be moved, but after the death of her owner, Mr. H. W. Morris, the Ports and Harbours branch took in hand the moving of the vessel.  In less than three weeks she was pumped out and refloated on a flood tide.  Three holes which had been blown in the hull by an unknown person, while the hulk was on the sandbank, were repaired, and the vessel was towed to Rye and later to Swan Bay.  To prepare her for her last voyage the temporary crew had rigged her fore and aft with flags so that she might go down with her colours flying.

The refloating and sinking of the Hygeia was a remarkable feat.  It was undertaken by Mr. W. G. Williams, an engineer of the Ports and Harbours branch, under the supervision of the engineer-in-chief (Mr. G. Kermode).  “To save cost,” said Mr. Kermode, “Mr. Williams improvised the motors and winches used in shifting the vessel almost single handed.  He achieved an almost impossible task at a cost of less than £250.  It was a remarkable performance.  The officers and crew of the Rip also did excellent work and gave valuable assistance.” . . . “

” . . . In the quiet of a grey, winter afternoon the old paddle-steamer Hygeia ended her days yesterday at the “ships’ graveyard,” which lies about four miles outside the Heads.  Stripped to a bare hulk, she was taken in tow by the Ports and Harbours steamer Rip at her anchorage at Swan Bay, near Queenscliff, and towed through the Heads.  When the “graveyard” was reached the hulk was cast off, a small charge of gelignite was fired in the stern, and she slowly settled down.  After more than half an hour the head of the hulk was flung upward, and with a rush of escaping air, she plunged tail first and disappeared . . . “

” . . . “Sunk in 35 fathoms,” was the official verdict on the Hygeia.  She lies in a deep “hole” which also accommodates the Buninyong, Courier, and many other old ships and submarines.  Although 42 years old, she was not obsolete as steamers go . . . “

In a time when ferries have not traversed Port Phillip Bay for some 80 years – just imagine if someone back then had had the foresight to save her – she was sleek and beautiful – she had serviced the bay for over 40 years without mishap or hiccup – she could have been preserved – what a wonderful attraction she would have made today . . .