The PS ‘Aphrasia’ was a paddle steamer, built on the Williams River, New South Wales, Australia, in 1840.

The wooden paddle steamer PS ‘Aphrasia’ is believed to be the third steamer to be engaged in the Port Phillip trade which commenced as early as 1838 – a mere three years after the very first settlers arrived on the banks of the ‘Yarra Yarra’.

” . . . The first Yarra Steamer was not inaptly named the “Firefly,” William Pearson, Commander ; and on the 28th October, 1838, she commenced to ply as a regular daily trader between the ports of Melbourne and Williamstown.  She condescended to carry passengers for 2s. 6d. per head each way ; goods 8s. per ton ; and towing vessels for £5 per job.  This apology for a steamboat was a half-rotten, incommodious old tub, more disposed to buzz than to fly, and with more smoke than fire in its composition.  She lumbered away for a time, not much to the advantage of either her proprietary or the public ; yet she continued in possession of the river until January, 1840, when her flying was put an end to, her fires put out, and her engine put to more profitable use by being transferred to a sawmill at Brighton . . . “

” . . . the ‘ Firefly’ … was succeeded by the ‘Governor Arthur,’ which came from Hobart Town in 1840, and was worked between the town and the Bay and ran for several years.  The next steamer was the ‘ Aphrasia,’ from Sydney, a smart article, which was in the Geelong trade for a time, and was highly thought of by the public . . . “

The PS ‘Aphrasia’ was the first steamer to service the run between Melbourne and Geelong – commencing in the latter half of 1841.  She would serve the ‘Port Phillip’ community faithfully during a time when the settlement was still in its infancy, when roads and jetties barely served their names – for some 20+ years she transported cargo, passengers, mail, bank parcels, assisted ships in trouble . . .

The Company’s first steamer was the PS ‘Aphrasia’.

” New Steamer. – We have been favoured with the perusal of a letter from Captain Lawler, dated “Deptford, William’s River, October 21, 1840,” of which the following is an extract: – ” The Aphrasia (the steamer building for the Port Phillip Steam Navigation Company,) is rapidly approaching completion, and if we could only get the workmen to give over tippling, she would he launched in the course of a month ; however, I have not a doubt but that she will be in Sydney by the 19th December.  The whole of her decks are laid and caulked; the rails, combings, and the whole of her upper deck works are completed.  The work now to do is to dub and caulk her outside, to fit the cutwater, figure head, and quarter galleries, and to copper and chenam.  I have seen every justice done to the vessel ; her planks inside and out are well paid with resin and oil, and so are her decks.  We shall rig her on the slip, so that on her arrival at Sydney, we shall have nothing but the engine and joiner work to finish.  Mr. Coke, the engineer, who has just visited us, declares her to be a remarkably well built vessel as well as a good model.  The engines are in a forward state.” . . .

26 Jun 1841 → the PS ‘Aphrasia’ had not yet arrived in Port Phillip Bay and concerns mounting as to her safety whilst on her journey from Sydney to Melbourne:

” . . . A considerable degree of anxiety naturally pervades the public mind respecting the detention of the Aphrasia so long beyond the period allowed for her arrival.  There is no occasion for entertaining any alarm, however, as to her safety.  We have but little positive news to communicate on this matter, but the negative information to be gleaned from other circumstances may deserve attention.  The weather up to the 12th instant, was so boisterous at Sydney, that the Jewess, which sailed on the 5th, was obliged to put back on the 11th, having only been able to get seventy miles to the southward during that time . . . “

Late 1841 → the PS ‘Aphasia’ commenced the Melbourne – Geelong run, under the command of Captain Lawler:

” . . . The first steamer between Melbourne and Geelong was the “Aphrasia,” leaving one day and returning on the morrow.  The fares were £1 cabin and 12s. steerage, with a scale of freights, sliding from £1 10s. for a horse to 5s. for a dozen of poultry.  She left on her first trip amidst the plaudits of hundreds of spectators, and made the passage in five hours, allowing for some delay in taking in firewood in lieu of coal.  The inhabitants of Geelong were so beside themselves on her appearance in the (then) beautiful bay of Corio, that they honoured the event with a feu de joie of musketry . . . “

22 Sep 1843 → the PS ‘Aphrasia’ transported the survivors of the shipwreck ‘Joanna’ from Geelong to Melbourne:

“The Wreck of the Schooner JOANNA . – The Joanna, a new vessel, belonging to Mr. Cassidy, of Launceston, was totally lost on the coast between Cape Otway and Moonlight Head, on the 22nd ultimo, during the passage , from Launceston to Port Fairy and Portland Bay.  On the morning of the 20th, the wind being from the northward, the vessel’s course was W.N.W., so as to hug the land, but a sudden shift of wind coming on, placed her on a lee shore ; the gale increased, and not being able to carry sufficient canvas, she was carried within the breakers, and washed on a sandy beach, where a seaman named William Cooper was drowned.  The survivors, finding that no possibility of saving any of the wreck remained, started towards Melbourne, and after undergoing great privations for seven days, arrived at Geelong, where a subscription has been set on foot for their relief . . . “

” . . . William Cooper, a seaman, was washed overboard, and the crew and passengers, in all 23 persons, abandoned the vessel, with the intention of making their way overland to Melbourne.  They had only a small stock of provisions with them, and getting lost in the bush for six days would have perished but for finding a dead whale adrift on the beach, the blubber of which averted starvation.  In the course of their wanderings they fell in with a tribe of Aboriginals, who behaved most kindly, and helped the outcasts to reach an out-station of Mr. Willis, west of the Barwon.  Here they were taken in, well done for, and enabled to reach Geelong, whence they proceeded in the “Aphrasia,” steamer, to Melbourne . . . “

9 Oct 1843 → the PS ‘Aphrasia’ transported the Bishop from Geelong to Melbourne:

” . . . The Bishop arrived at Geelong on the 25th September, per the ” Rajah ” from Sydney, and continued for a fortnight in the Western District.  On the 9th October he came by the ” Aphrasia ” steamer to Melbourne, and was met at the wharf by a number of gentlemen from whom he received a respectful and cordial welcome.  Dr. Cussen (the colonial surgeon) had his carriage in readiness, into which the Bishop and the Rev. Mr. Thomson stepped and were driven to St. James’ . . . “

” . . . about 2 o’clock on Monday morning, the steward came to my cabin and said – for God sake captain jump up, the boat is on fire, which, I instantly did in my shirt only ; I ran forward and called up the crew and mate, and for a quarter of an hour tried to extinguish the fire by our own exertions finding our efforts in vain . . . “

15 Aug 1850 → the PS ‘Aphrasia’ assisted in rescuing cargo from the stranded Barque ‘Victory’ when she ran aground in ‘The Rip‘ whilst travelling from Glasgow to Melbourne:

” . . . the Victory was on a bank of rocky ground half way between Shortland’s Bluff and Point Lonsdale ; she rolled heavily, and the swell was coming in with a flood tide ; she was also, striking heavily on the shoal on which she lay . . . “

Source:  Excerpt – ‘Geelong Advertiser’ (Vic) – Article “The Late Stranding of the Victory from Glasgow. – Claimants for

” . . . The parties could not agree as to the amount of salvage to be paid, and, under an English Statute then in force, a Board composed of Messrs. R. W . Pohlman, B. Heape, and E. Westby, was appointed to adjudicate, when the following award was made : £115 to the master and crew of the Government schooner “Apollo,” £145 to the master and crew, and £250 to the owners of the ” Aphrasia ” steamer . . . “

1851 → the PS ‘Aphrasia’ was tasked with delivering the mail and bank parcels: ” . . . The robberies of inland mails were of such frequent occurrence as to alarm the Banks, and the Superintendent sanctioned a special ship mail between Melbourne and Geelong per the ” Aphrasia” steamer, which started from Melbourne at 10.30 a.m. on Thursdays, and returned the day after, more particularly for the transit of bank parcels . . . “ 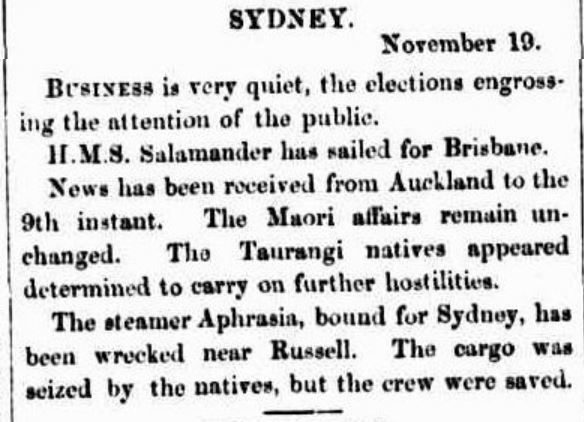 Jul 1863 → the SS ‘Edina’ encountered one of the very first steamers to service the Port Phillip Bay runs at Bluff, Southland, New Zealand: