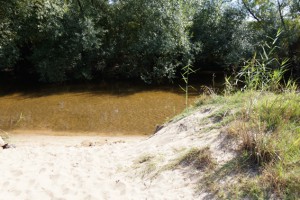 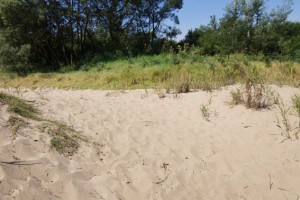 The beautiful sandy beach on the Tambo River at Tambo Upper makes for a perfect spot to enjoy a picnic, sunbathe on the warm sands, frolic in the ankle deep waters of the river. 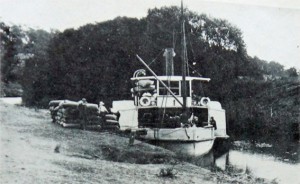 It is hard to believe that in the early 1900’s, steamers plied up and down the Tambo River delivering and picking up goods and passengers.  The picture c 1914 was taken in the very spot as the photos c 2015.

Further research reveals the reason for the dramatic change in the landscape.

A sand slug is defined as a slow moving mass, that makes its way down a river.  Though it can take centuries to move through the river system, history has demonstrated that generally rivers can heal and recover.

In the particular case of the Tambo River many factors have contributed to the formation of the sand slug – all attributed to activities of the European settlers and all within a tiny timeframe, geologically speaking, of less than 200 years.

Following the exploration of the Tambo River valley during the 1830’s by George McKillop and then Angus McMillan in the 1840’s, gold was discovered in the Upper Catchment areas in the 1850’s.  Mining for alluvial gold using hydraulic sluicing methods commenced as early as 1857 in Swifts Creek, followed by Doctors Flat, Haunted Stream, Sandy Creek, Cassilis and Tongio West in the 1860’s.  Mining for reef gold rapidly expanded from the 1890’s.

Simultaneously, steamers began navigating the lower Tambo River in the 1850’s, supplying the mining operations in the upper catchment areas and later, the farmers and other settlers.  The water highways that the lake and river systems of the Gippsland Lakes bestowed, were the only efficient method of transport at this time, as the terrain was formidable for land transport.  Water transport to Melbourne, however, remained a massive challenge via the natural entrance from Bass Strait into the Lakes (which often closed for months and sometimes years) until the artificial entrance was completed c 1889.  Many a ship fell to the natural forces of the bar at the old entrance.

Meantime, wharves were constructed at Mossiface, Battens Landing and Tambo Upper.  It was necessary to clear the river of logs and snags to ensure the safe passage of the steamers.  The land of the fertile river flats was cleared, agriculture boomed, logging was crucial for the infrastructure and tourism was encouraged to introduce people the the stunning landscapes of Gippsland.  All these factors, and more, contributed to the massive and relatively sudden dislodgement; and hence movement of sediment from the upper catchment, down the river.  In the decade from 1890 to 1900 and with the major floods of December 1893, the river bed rose by approximately four metres between Bruthen and Tambo Upper.  The river had also altered its course.

The sediment build up or ‘sand slug’ in the lower reaches of the Tambo River resulted in increasing difficulty in navigating the now shallow river.  This, combined with the introduction of new means of transport over land, via rail and later road, in the early to mid 1900’s; contributed to the end of the era of commercial shipping on the Tambo by the 1930’s . . .