It is recorded that WO Raymond established the Shakespeare Hotel upon his ‘Stratford Run’ (some 16,000 acres in size) in the year 1848.  This hotel, sited on Gippsland’s oldest road running from Omeo to Port Albert, would mark the beginnings of the township of Stratford. Following the crossing and naming of the Avon River by explorer, Angus McMillan on the 21st January 1840, William O’Dell Raymond soon followed, establishing his first runs in the area along the banks of the Avon River from McMillan’s ‘Bushy Park’ run all the way to Lake Wellington just two years later:

” . . . The runs which I have selected are on the Avon River, and extend to a lake into which the river empties itself, and are a fine, open, undulating country, sound to the water’s edge . . . “

Though details are sketchy, it appears that around 1847, either WO Raymond himself, or, an unnamed settler who reportedly paid a fee of his best racing pony to build upon Raymond’s run, built the Shakespeare Hotel.  The Shakespeare Hotel would become the central hub of the region.  The Plan of the Township of Stratford c 1855 clearly identifies the hotel, its surrounds and this section the original roadway running all the way from Omeo to Port Albert.

Though it is unclear as to who actually built the hotel, it is known that WO Raymond acquired it in the end.  Being a large building, it housed most of the local meetings, court hearings, public gatherings, etc.  The police cells and the ‘Stratford Lodge’ Meeting rooms were built into its rambling layout, as were the saleyards and of course its main function of the public bar and accommodation.

Eventually a small settlement began to grow around the Shakespeare Hotel.  It is presumed that the naming of the ‘Stratford’ run was based upon the town of Stratford in England, which is located on the Avon River.  Stratford, England is famous for being the birth place of William Shakespeare.  Uncannily, WO Raymond named the ‘Shakespeare Hotel’ – perhaps in honour or this famous writer ???  Just across the road, the remains of an old bridge can still be seen amidst the vegetation – sadly, nothing remains of the historic ‘Shakespeare Hotel’ . . .

The township of Stratford was surveyed in 1854.  The plan dated 1855 shows the original foundations of the town located on what is now known as Merrick Street, which runs along Blackall Creek.  The buildings included the Shakespeare Hotel, Duncan’s Store, some Stockyards, a Tannery, Catholic Church, Hobson’s Garden, the roadway running from the Mitchell to Sale.  The ‘Stratford Run’ was cancelled in the June of 1867.  Interestingly, the centre of town is now positioned on the Princes Highway – also known as Tyers Street.

Sometime prior to the death of William Wood, his wife and the former housekeeper of WO Raymond, Fanny Wood (nee Poole), acquired the hotel.  She rented the hotel to Henry Dickins in 1863 who, five yeas later, sold it to Michael Feely, a former policeman. 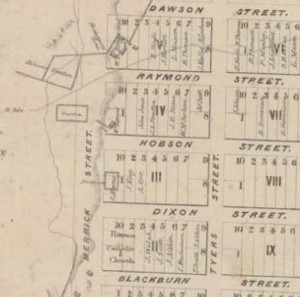 The licensees that followed were:

1885 saw the year that Parliament passed a new Licensing Act to create a separate Licensing Court for each district.  The Act curtailed hotel opening hours and sought to prohibit the employment of young women as barmaids, unless they were of the Licensee’s family, suggesting that barmaids were fallen women or at risk of becoming so.  Their real objection was presumably that barmaids made hotels more attractive.  The proposal was only narrowly defeated . . .

In 1886 a new Act introduced the local option procedure, by which residents could vote to reduce the amount of hotels in their area.  The Stratford division was one of the first to conduct the opinion poll.  Of 851 residents only 395 voted; and of that 301 voted to reduce the number of hotels to the minimum.

The result was that the hotel owners were summoned to court in Sale and subsequently only the ‘Stratford Hotel’ survived.  The Swan and Shakespeare Hotels were both ordered to close.  The objecting owner of the Shakespeare was, however, awarded 400 pounds compensation.

The hotel continued as a ‘Temperance Hotel’, managed by the Pooles until the late 1800’s and many various families and managers thereafter.  The buildings were used for numerous and varied purposes until the 1950’s when it became derelict and uninhabitable.

Tragically, the once centre and pinnacle of the town was burnt to the ground, by appointment, by the Stratford Fire Brigade in the early 1960’s.

Fortunately, the community of Stratford have erected a monument to preserve the history of this founding structure that was once an integral part of the community.  The surrounding parklands along Blackall Creek are beautifully maintained.  Also, just diagonally opposite where the old Shakespeare Hotel once stood, the remnants of an old bridge can still be seen – basically in the position where the original roadway to the township of Sale once passed . . .