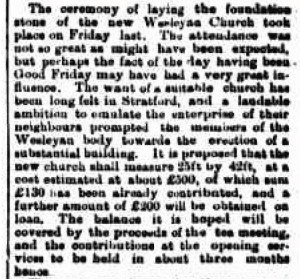 The foundation stone of the historic Wesleyan Methodist Church situate in Stratford, Victoria, was laid by Mrs. George Little on the Friday, 11th April 1873 – with a specially purchased silver trowel.  It is believed that a container naming the Chief Stewards of the time, being “Mr George Little, Mr William Little and Mr Poole” was placed under the stone, however, neither the foundation stone nor the trowel have been recovered.  It is suspected that extensions to the rear of the church which provided accommodation for visiting ministers, may be covering the foundation stone . . .

The builder is believed to be Robert Vick at an approximate cost of £300.  Mrs. Fanny Swan paid the last £50 required to clear the church of debt in 1892.

The ‘Stratford Historical Society’ was formed in October 1968 and was originally located in the Stratford Courthouse.  1980 saw the society relocate from the Courthouse to this former Methodist Church – where it still remains today.

The Historical Society purchased the church and adjoining block from the Uniting Church in 2004, the titles were consolidated and a storage shed built.  The Museum was closed in 2004, the exhibits put in storage and the volunteers set to work to restore the dilapidated building.

The beautifully restored museum was re-opened on the 30th April 2006.