Interestingly, the need for the Latrobe Wharf or Landing (as it was also known) was due to the lack of foresight.

Philip McArdell began building his paddle steamer, the PS ‘Enterprise’ in 1857 at McArdell’s Gap on the banks of the Thomson River near the township of Sale (previously known as Flooding Creek).  The Thomson River flows into the Latrobe River, which feeds Lake Wellington, flowing into Lake Victoria continuing on to Bass Strait.  He had anticipated transporting goods and passengers throughout the massive Gippsland lakes and river system, linking the region internally and to Melbourne via Bass Strait.  However, the vessel was half ribbed, when a notice appeared in the ‘Government Gazette’ calling for tenders to the build a bridge to replace the Latrobe River punt service, which had commenced operation c 1842 by James Aitken, approximately 800 m downstream from where the PS ‘Enterprise’ was being built . . . 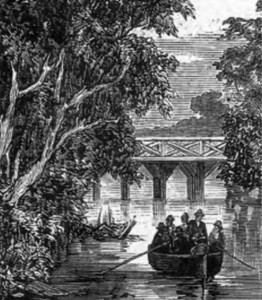 It was immediately apparent that the specifications of the bridge rendered it too low for steamers to pass thereunder.  Though the locals petitioned to redesign the bridge to incorporate a draw bridge, the petitions were denied . . .

The low level Toll Bridge, together with the Longford timber causeway (constructed using the timber corduroy construction technique),  was built just downstream from the junction of the Thompson and Latrobe Rivers – completed c late 1857.

Henceforth, the PS ‘Enterprise’ was stranded – some 800 m upstream from the bridge . . .

Gippsland, a land of fertile plains, gold fever, beauty and hope, was also the most challenging to reach, with mountains and dense forest to the north and the east; major rivers throughout; morass, flood plains and huge swamp areas to the south and to the west. 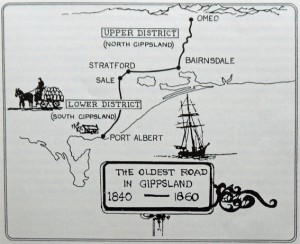 The north to south overland trip from Omeo to Port Albert via Sale (the oldest road in Gippsland) was arduous, lengthy and costly.  Port Albert was so far out of the way . . .  As it became more and more apparent that the major rivers all fed into an enormous, navigable lake system that opened (though challenging) into the sea, transport via the waterways was the obvious answer.

The combination of the township of Sale becoming a commercial centre for the area; together with the rivers and lakes, the most efficient form of transport – the low line bridge over the Latrobe River remained a major obstruction. 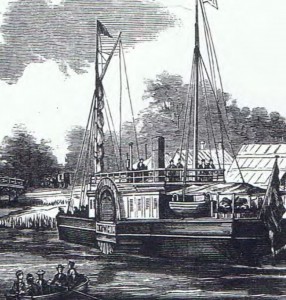 There was no option but to build a wharf at the foot of the bridge so as supplies and passengers could embark / disembark the water transport and commence / complete their journey overland for a distance of some 5 km upstream from the bridge to Sale.

Hence, the Latrobe Wharf became the port for Sale. 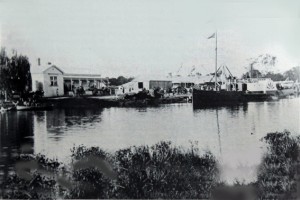 The Latrobe Wharf developed into a vital link carrying enthusiastic miners and supplies, via steamer, from Sale to the gold diggings of north Gippsland.  The return journey would transport timber posts, rails, shingles, flooring boards, wool, wattle bark, etc.  By the 1870’s more and more produce would be transported and, the passenger service also increased as the tourism industry grew.

” . . . A new holiday resort has been opened by the completion of the Gipps Land Railway.  The journey from Melbourne to Sale can be made in about six hours.  Three miles from Sale is the Latrobe-bridge, the present head of navigation; and there the steamer can be taken for the Lakes Entrance and Ninety-mile Beach, or for the township of Bairnsdale, on the Mitchell River, points almost equally distant from Sale, and reached by a pleasant trip across the large lakes, and through the straits which connect them.  An appropriate opportunity is now afforded to detail more fully than could be done by telegraph the incidents of the progress made two or three days ago across the lakes in the steamer Tangil by the large party of visitors who went down to see the railway officially opened last Friday . . . “

A natural entrance between the lakes and Bass Strait was discovered as early as 1842, however, it was not until 1858 before a substantial vessel successfully sailed through the narrow and shallow opening.  Despite the challenges of this changeable entrance, vessels from Melbourne, Sydney and Hobart were soon navigating the lakes and into the lower reaches of the rivers.  Port Albert began to decline as Sale based shipping companies provided direct communication with Melbourne, thus successfully by-passing the long and arduous overland journey from Port Albert to Sale. 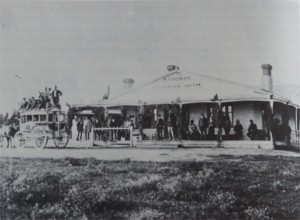 As trade grew, two hotels were built at the Latrobe Wharf, as well as storehouses, infrastructure, the ‘Willows Jetty’ upstream, etc. . . .

It took the government 25 years to rectify their lack of foresight, removing the old low level bridge and replacing it with the much celebrated Swing Bridge in 1883.

1889 saw the completion of The Entrance – the permanent opening between the Gippsland lakes system and Bass Strait.

1890 saw the completion of the Sale Canal which, at last, directly linked the water highways to the township of Sale.

1890 also saw the opening of the Sale to Port of Sale railway link on the 28th day of September. 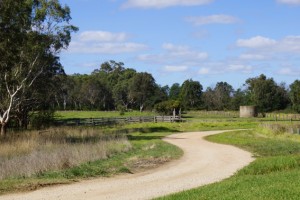 However, by this time, the era of water transport was already on the decline – as improved rail, and later road, services seriously challenged the steamer trade.

The Latrobe Wharf also slowly, but steadily sank into obscurity – as the steamers passed on by – travelling aside the Swing Bridge, up the Sale Canal, directly into the Port of Sale.

Today, there is no evidence of the busy wharf, the hotels nor the storage sheds left on land; and only minimal evidence of some old wharf footings, lying concealed, beneath the river surface . . .

– Other Historical POI’s in Sale