Located on the shores of Ticonderoga Bay, within Port Phillip Bay, this relatively new granite monument erected by the Nepean Historical Society Inc. on the 10th November 2002 lies adjacent to the historical ‘Heaton’s Monument‘ c 1856 – both of which identify the location of the original cemetery established at the Quarantine Station at Portsea in Victoria.  Upon the arrival of the tragic Clipper ship ‘Ticonderoga’ on the 22nd December 1852, a quarantine station was hastily erected at this site.  Sadly, a cemetery was also immediately required as of the 170 people that died due to the Typhus Fever that engulfed the ship, 70 people were to perish upon their arrival to Port Phillip.

” . . . when the Government Emigrant ship Ticonderoga arrived (No. 4) reporting 96 deaths from Typhus Fever, during the voyage and nearly every soul on board including the crew, sick ; the pilot in charge I think Mr Kerr very properly anchored on the Nepean side, about ¾ of a mile from the shore.  Immediately the news reached Williamstown fresh meat, vegetables, &c., were sent down by the Government Schooner Empire.  Tow medical men were landed and housed in tents erected with the ships sails and spars, and in tow or three small huts vacated by some limeburners.  A contract for the supply of beef, eggs, milk, etc., etc. was made with Mr J. Barker of Cape Schanck station, 25 miles distant.  Wells were sunk along the beach I should mention that when H.M.S. Vulcan seemed likely to be detained at Point Nepean, the ship Lysander was hired for stores and officers quartters ; in fact she had completed taking on board stores, water etc., before the error committed by the ships surgeon was discovered, and on the arrival of the Ticonderoga a few days latter she was fitted up as a hospital ship 50 beds and sent down to Point Nepean taking on board the sick.  Some of these remained at the station for many weeks ; but about the middle of December the convalescent and passengers were reemmbarked and pratique granted.  82 deaths occurred in Quarantine in 6 weeks, making a total of 178 ; the crowded state of the badly ventilated decks, especially the lower one, was the cause.  There were three other doubled decked Government Immigrant vessels chartered.  Total 3105 pass., 212 deaths ; Subsequently to the arrival of the Lysander the sick from every ship were place on board, taken shore when convalescent, and housed in tents and miamias until forwarded by H. M. Empire to Geelong or Melbourne . . . “ 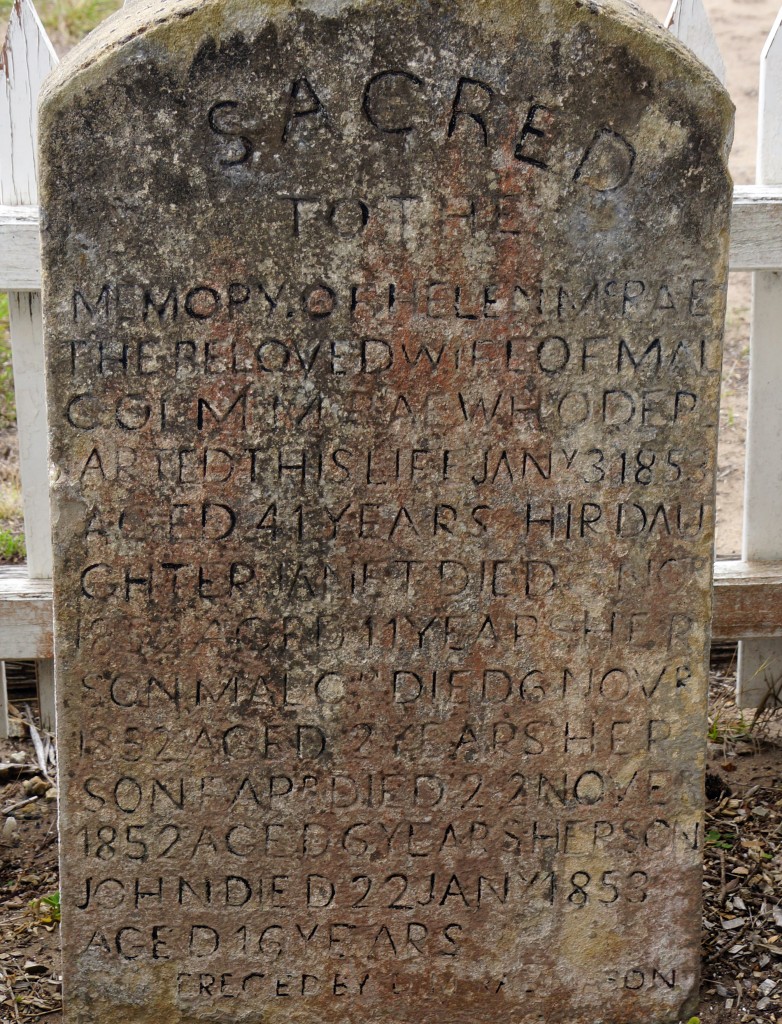 The cemetery was relocated further inland c 1854.  One of the headstones removed to the new cemetery in 1952 site echos the pain and heartbreak of those lost to the fever.  A transcript of the McRae Family Headstone reads:

Erected by D McRae  B Mason”

The granite monument is inscribed with the details of the cemetery and all those who perished on the ‘Ticonderoga’.  A transcript of an extract of the inscription reads:

The original burial place of those who died while in quarantine.  Sea erosion over the years caused graves to collapse and storms uncovered the remains.  In 1952, the quarantine station staff moved all that was identifiable to Pt. Nepean cemetery.  The first burials in this cemetery were of the immigrants of the sailing ship Ticonderoga.

An American registered sailing ship of 1089 tons, 169.8 ft, chartered by the British Emigration Commissioners to transport shepherds and farm workers with their families, to replace workers in Australia who had deserted for the goldfields.  The Ticonderoga sailed from Liverpool on 4 August 1852, with Captain Boyle, Surgeon Dr J C Sanger, Assistant Surgeon Dr James W H Veitch, 48 crew and 795 immigrants from the Highlands of Scotland, North England, Somerset, Gloucestershire and Ireland.

Provisions were plentiful and water was of good quality.

On 3 November, 1852, the Ticonderoga arrived at Port Phillip Heads.  During the voyage 100 immigrants died and 19 births were recorded.  In quarantine at Pt Nepean about 400 were seriously ill mainly of typhus fever, a number of births and a further 70 deaths occurred on shore.  The official death toll is 169 passengers and 2 crew.  The ship was released from quarantine on 22 December 1852, deaths which occurred after this date were not considered as having taken place during the voyage.  The number of these deaths is not known because there were no statutory records at the time but at least ten further deaths can be reliably inferred from contemporary sources . . . “ It is interesting to note that an Immigration Report prepared by the Colonial Secretary, dated 9th June 1853, attributes the disaster of this and a number of other ships to gross overcrowding.  Some extracts of the report detail:

” . . . 2. The vast and hitherto unprecedented influx of population to this colony during the latter part of the year 1852, and which has continued steadily to increase up to the present date, owing to the discovery and rapid developments of the gold-fields of Victoria, renders the subject which I am now called upon to consider, one of more than ordinary importance ; while the inadequacy of the accommodation afforded by this city to furnish even temporary shelter to the myriads now landing daily on our shores, has become a matter of serious and increasing anxiety . . . “

” . . . 5. The first return which I have to bring under your Excellency’s notice is Return No. 4, which contains particulars of the ships chartered by Her Majesty’s Colonial Land and Emigration Commissioners for the conveyance of Immigrants to Victoria, giving the various details connected therewith.

From this return it will be seen that the impulse given by the gold discovery to assisted immigration has been very great, no less than forty-two ships, conveying in all 15,477 souls, having cast anchor in our waters in 1852.  Of these immigrants 5007 were adult males, and 5345 adult females, the remaining 5125 being children.

I regret to state that the number of deaths which occurred on the voyage amounted to 840, forming a large per-centage on the whole.  This result I attribute, in a great measure, to the practice recently adopted of embarking large numbers of from six to eight hundred people on board two-decked ships, as it will be seen in only four ships, Bourneuf, Marco Polo, Wanata and Ticonderago, the united deaths amounted to no less than 356.

It is gratifying to remark, however, that during the current year, and since Her Majesty’s Colonial Land and Emigration Commissioners have abandoned this pernicious system, and refrained from sending out more than 350 souls in vessels of moderate size, the per-centage of mortality has very much decreased . . . “

” . . . The number of assisted immigrants landed at the several ports was as follows:

The number of births which occurred on board the various ships was 270, of which 148 were males, and 122 females.

It was found necessary to place four of these ships, viz., the Bourneuf, Wanata, Chance, and Ticonderago, in quarantine, the principal diseases being scarlet fever, typhus fever, and measles.

Of the forty-eight surgeons superintendent and assistant surgeons, it was found necessary to withhold the usual gratuity or certificate from two only, a fact which speaks well for the care bestowed in the selection of those officers.

This return will show that in the six months ending 31st December, 1852, no fewer than thirty-three vessels, containing 12,956 souls arrived ; whereas, in the corresponding six months of 1851, the number of ships was seven, and the number of passengers 1987 . . . “

” . . . 8. The great disproportion which appears in the number of the Scotch sent out may possibly be attributed to the destitution existing in the Highlands and islands of Scotland, a subject to which I shall have occasion hereinafter more particularly to advert . . . “

– A Car Park is available to service the Quarantine Station