Ironically, it is reported that the cemeteries associated with Melbourne’s first two quarantine stations were both located too close to shore, resulting in bodily remains becoming exposed due to erosion and hence, the necessary relocation.

Following the emergency of the ‘Glen Huntly’ in 1840, the first quarantine station, which had been located at Point Ormond in Elwood (then known as ‘Red Bluff’), was deemed too close to Melbourne, thus risking the escape of potentially infected internees.

Twelve years later, it was with great haste that a new quarantine station was established at Point Nepean – upon the arrival of the Clipper ship ‘Ticonderoga’ on the 22nd December 1852.  On board was the dreaded fever, typhus, that had torn through those on board.  Tragically 168 passengers and 2 crew, of the 814 persons on board, succumbed to the fever – 100 dying at sea – 70 upon arrival at Port Phillip.

A small quarantine cemetery was quickly fashioned near the water’s edge, in which to bury the dead from the ‘Ticonderoga’.   It is believed some 100 people were buried at this location until erosion began to encroach upon the cemetery, unearthing some of the bodies that had been buried there. 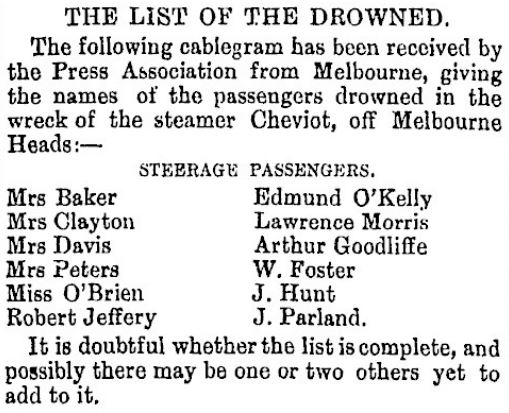 The ‘Heaton Monument‘ c 1856 remains to mark the site of this first cemetery.

A new cemetery was established in the September of 1854.  It was located just outside of the quarantine station’s western boundary which meant that visitors to the cemetery were no longer subjected to quarantine restrictions.

Many early settlers were buried at this site, as well as victims of the shipwrecks ‘Tornado’ (1868) and ‘Cheviot‘ (1887), wrecked in the waters surrounding Point Nepean.  This cemetery was used by locals until the cemetery in Sorrento was opened in 1890.

” . . . As an instance of Government callousness, we may point out that the cemetery at the Quarantine Station at Sorrento is a positive disgrace . . . “ A transcript of the McRae Family Headstone reads:

Erected by D McRae  B Mason”

The tragedy and pain can still be felt when reading this sad, sad headstone . . . ” . . . Edward Mathieson, third officer of the steamer Cloncurry, was drowned on Monday last off Cape Otway.  His brother, Captain Mathieson, met with a similar fate about thirteen months ago off Cape Schanck by the foundering of the steamer Alert.  It appears that when the steamer Cloncurry was off Cape Otway a saloon passenger, Mr Thompson, who had developed small pox of a very marked character, escaped from his cabin while delirious and plunged overboard.  The ship was immediately stopped, and a life buoy thrown to him, which he seized, and so kept himself afloat.  Instinct alone must have prompted him, because at the time he was quite irresponsible for his actions.  The third officer, Edward Mathieson, and the steward jumped into the lifeboat and commenced lowering it.  The forward gear carried away when the boat was near the water, and both men were thrown into the waves.  It was known that Mathieson could not swim, and when his body was seen on top of the waves it was thought that he was floating.  A second boat was successfully lowered, and when he was picked up it was found that he was dead.  It was supposed that he was struck by the falling boat.  The steward was in a very exhausted condition when rescued, as was also Thompson, the small pox patient, who, however, rallied in a very short time, and the immersion seemed to have done him more good than harm.  Mr Mathieson’s brother officers worked hard to restore animation, but without success.  Mr Mathieson was a great favourite among the passengers, and also with is brother officers, and his death cast a gloom over the already sorrow-stricken vessel . . . “

Though it is believed that over 300 people are buried in this cemetery, few headstones or markers remain.  In 1952 all remaining stone monuments, etc. were relocated from the old cemetery to this location . . .