The Urangan Pier, which is served by the Maryborough-Pialba Railway extension, officially opened about three years ago, will be opened by his Excellency the Governor on Saturday.  It is stated that the official estimate of the cost of the pier was about £50,000, including sheds, crane, and the lighting of the channel, but what the actual cost was will, perhaps, be disclosed on Saturday.  Urangan is about 29 miles from Maryborough, or about the same distance that lighters at present must travel from the deep-water anchorage to Maryborough wharves.  The approach from the sea to Urangan is stated to have a governing depth of 18 ft at low water, and the tides vary from 10 ft to 12 ft at the springs.  The fairway buoy in Hervey Bay is nine miles from the pier, and two stretches of the approach carry 18 ft, at low water.  At the head of the pier there is stated to be a depth of 28 ft on the outer side and 25ft on the inner side.  The structure is of concrete and wood.  Its total length, including the head, is 3890 ft, or practically three-quarters of a mile . . . “

Mention of the need for a pier at ‘Urangan Point’ was published some 34 years before it was finally achieved and opened:

” . . . There is a lot of back freight from Maryborough in stores, bricks, machinery, timber, luggage, furniture, &c., &c.  The natural advantages of Torquay and Torquay Bay are so great that the population, buildings, and carrying traffic of the place is sure to make rapid progress, to be measured not by years, but by months and weeks.  In addition to the town traffic, the British India Company’s steamers and the large immigrant vessels from Europe which cannot get up the Mary will probably soon anchor at Urangan point, situated about 2 miles from the Torquay Ship Chandlery and General store.  The coal trade will soon burst upon Maryborough with such a rush that the deepwater anchorage at Urangan point will become a pressing necessity, and then the railway will be run into Torquay as far as the point, and a jetty constructed . . . “ Docked at the Urangan Pier

Originally 1,124 m in length, the ‘Urangan Pier’ carried a full-sized steam engine which hauled cargo wagons to the waiting ships docked at the end of the pier.  At the seaward end of the pier which is sadly now demolished, the pier curved westward, housing sheds and cranes, and, the pier branched into three – each with its own track.

Ultimately, the pier had to be serviced by the railway in order to transport the cargo.  Rail had arrived in Pialba in 1896.  The notion to extend the railway line to Urangan resulted in the completion of the extension in 1913. 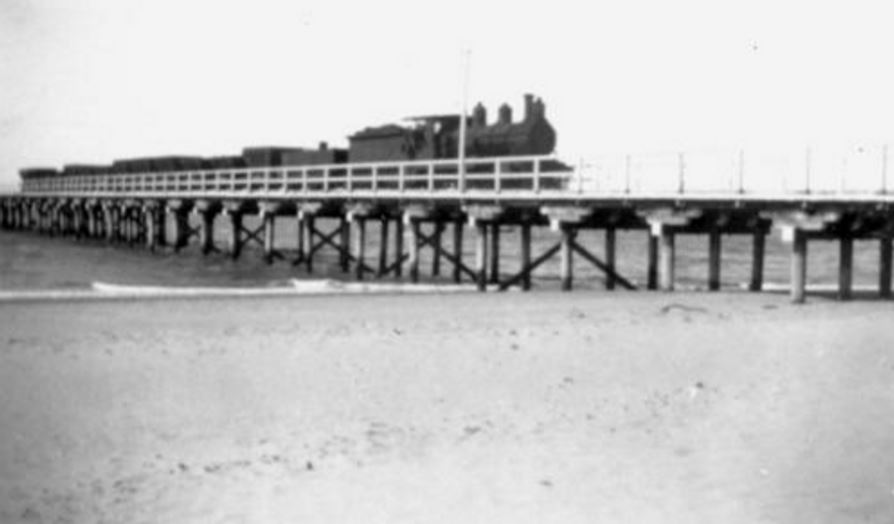 The line was again extended to connect and service the new pier, by the time it opened, in 1917.

Interestingly, the logs used to build the pier were acquired from the forests of the now World Heritage Listed (1992) Fraser Island.  More than 1,000 x 22.5 m long logs of ‘Fraser Island Turpentine’ (also referred to as Satinay), were used to build the pier.  The logs were hauled into the water by bullock teams, and towed by boat to the pile driver – a task so onerous that the workers could only manage to erect three piles per day !!! ‘Fraser Island Turpentine’ occurs only on Fraser Island apart from some small plots found in the Cooloola area nearby.  The logs resemble ‘satinay’ however, are easier to work and generally have fewer defects.  ‘Fraser Island Turpentine’ is not susceptible to Lyctid Borer attack and is also termite resistant.  Hence, from 1925, it’s qualities earned it worldwide recognition.  It was much sought after and widely logged and exported.  It was amongst the major exports loaded onto ships from the ‘Urangan Pier’, together with sugar from the Maryborough and Bundaberg Mills, and, coal from the Burrum Coalfields.

” . . . Great piles 100 to 200 feet clear to the first limb, are there in thousands, straight as an arrow, but by far the greater number are much too big for piles, and can only be used as saw mill logs up to about 4 or 5 feet in diameter.  Beyond that limit again come the super giants, so big that no sawmills at present in use in Queensland have any machinery capable of handling them . . . “

At last, the district had acquired a deep water facility.  The positioning and extraordinary length of the pier was to ensure enough depth for the ships at all times – as Hervey Bay experiences large tide fluctuations.  Coupled with that was the fact that the Great Sandy Straits are shallow and lack a continuous deep channel – a phenomena that challenged even the most astute navigator, seaman and explorer, Matthew Flinders, who could not find a passage through . . . 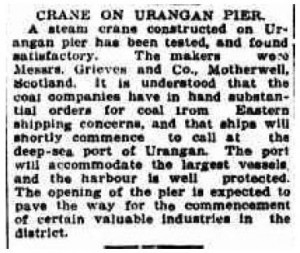 For over 45 years the pier busily managed the cargo exports, however, the 1960’s saw exports of coal and sugar from the ‘Urangan Pier’ draw to a close.

Importing fuel was the new commerce, however that too ceased in 1985, leaving the pier without function.  The state government ordered the structure to be demolished . . .

As the demolition works began, the public rallied together to save the pier.

Though 256 m of the seaward end of the pier had been demolished, the remaining structure that we see today was saved.  Restoration works have continued until this very day and thankfully the pier still proudly stands, accommodating sightseers, fishermen, tourists – who all enjoy the 868 m stroll out into the bay, enjoy views back to the foreshore, across to Woody and Fraser Islands, and, down into water where the marine life abounds.

The pier is now a major tourist attraction.

‘Lions Park’ is situate at the foot of the ‘Urangan Pier’, offering all manner of facilities, information and amenities within the setting of beautifully landscaped gardens.  The park enjoys wonderful views along where the railway once ran, down the pier, across the bay – a wonderful spot to stop whilst enjoying the Urangan leg of the Hervey Bay Esplanade Trail.

– One of the many facilities along the Hervey Bay Esplanade Trail

– Facilities available at Urangan include: