A beautiful monument located on the edge of the escarpment overlooking Hervey Bay, at Dayman Park, Urangan, Queensland, celebrates the incredible skills of Matthew Flinders during his 1799 voyage developing maps of the newly discovered ‘Terra Australis’, as well as Lieutenant Joseph Dayman’s successful navigation of the challenging ‘Great Sandy Strait’. Hervey Bay was first observed by Captain Cook during his voyage around the world in 1770.

By the time Matthew Flinders mapped the area in the August of 1799, the maps clearly noted the name of “Hervey’s Bay”.

Up until this time it was believed that Fraser Island as we know it today, was a peninsula.  Matthew Flinders established that it was, in fact an island, the maps referring to the island as the “Great Sandy Island”, however: 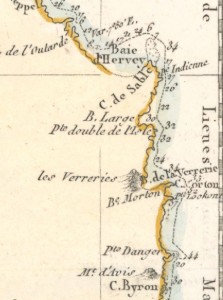 ” . . .  The larger island, lying to the east, is richly covered with grass and wood.  Its position is nearly in the middle of the entrance to what may be called the upper bay; and as no deep channel past the island could be found on the west, I determined to try on the east side; having much difficulty in believing, that a piece of water six or seven miles in extent every way, should not have a channel into it sufficiently deep for the Norfolk.

The anchor was weighed soon after four o’clock, and several attempts made to get round the larger island; but being constantly repulsed by shoals, I was at length forced to relinquish the hope of penetrating further up Hervey’s Bay.  We then steered north-westward, to complete the examination of the west side down to the coast seen by captain Cook . . . “

Source:  “A Voyage to Terra Australis . . . ” – by Matthew Flinders Commander of the Investigator – published 1814.

It was Lieutenant Joseph Dayman who successfully navigated a course through the channel between the “Great Sandy Island” and the mainland around the 10th November 1846:

” . . .  A few days after our arrival at Port Curtis, the Asp, as our decked boat had been named, joined us, having made an important addition to the surveys of this portion of the coast. On his passage up from Brisbane, Lieutenant Dayman, under the unexpected circumstances of finding that the Rattlesnake had sailed, instead of coasting along the eastern side of Great Sandy Island, thus involving the necessity of rounding Breaksea Spit, determined upon trying the passage between that island and the mainland leading into Hervey Bay; this he fortunately succeeded in accomplishing, although under difficulties which his sketch (since published by the Admiralty) will lessen to those who may require to use the same previously little known channel . . . “

– Facilities available at Urangan include: