A memorial commemorating the arrival of the first Europeans to settle in ‘Hervey Bay’, the Martin family, is located in the approximate vicinity that the family first landed on the shores of what is now known as Pialba, on Queensland’s Fraser Coast.

On the 30th November 1863, Boyle Martin, a young man in his early 20’s, his wife, Sarah, and their baby son rowed down the Mary River into Hervey Bay, landing in the vicinity of the memorial.

As with many regions along the east coast of Australia, it was the timber getters that first penetrated the massive and dense rain forests or ‘scrub’ as it was referred to back then.  Boyle Martin, was a timber getter – the following transcript describes the scene at ‘Hervey Bay’ in 1865, shortly after the arrival of the Martin family:

” . . . and, while enjoying the holiday, I began to feel in a reminiscent mood, and commenced to make notes of the transformation that has taken place during the 60 years that have passed since my last visit to Urangan.  The camp mentioned above was the only camp visible at that time along the coast.  There were timber getters at work in the scrub, but their camps were back some distance from the coast.  There will be some alive to-day who will remember the names of Boyle Martin, Buchanan, and others who had parties at work amongst the pine scrubs at that time . . . “

Boyle Martin set to work, cutting tall stands of timber, binding them together to form rafts, and floating them up the Mary River to the Dundathu Sawmill:

” . . . Most of the timber cut in the cedar and pine scrubs was simply rolled into the river, and the logs floated to the mills . . . “

” . . . As may be expected with dense pine or cedar scrubs extending for miles, timber getting was a profitable occupation, and in 1859 large sawmills to utilise the timber of the district were started at Dundathu, by Messrs. Gladville and Greathead, followed by Pettigrew and Co., of Brisbane, whilst later on Mr. Percy Ramsay established similar works at Mungarr. . . “

The following excerpt describes the highly prized timbers and the lands that greeted the timber getters, such as Boyle Martin, that first entered the region:

” . . . The indigenous timber of the Wide Bay district is cedar, red, white and blue gum, tulip, stringy and ironbark, Moreton Bay pine, Cyprus and kauri pine, acacia, rosewood, myrtle, myall, bloodwood, silky oak, ash, box, red ash, tulip, beech, sandalwood, and others of more or less value and utility.  All the northern scrubs or jungles teem with verdure, and the wealth of timber, not only to the present generation, but to those who come after them, is a boundless heritage from Nature.  The fern tribe is also well represented, having upwards of sixty varieties.  In 1877 timber from Wide Bay was exported, valued at £35,629; all the woods hereabouts are of great utility for constructive purposes, especially cabinet work and furniture, being beautifully grained, and capable of taking a high polish . . . “

By the mid 1890’s, much of these valuable trees and amazing rainforests had been replaced with fields and farms:

” . . . Among special industries, the timber trade occupies a prominent place, and from the day the first settlers arrived to the present time, the felling of trees for various purposes has gone on uninterruptedly.  Millions of feet of timber have not only been shipped to other parts, but both Burnett and Wide Bay have absorbed and utilised a like quantity, so that the vast forests have been gradually thinned of the best trees, and we must now either use the residue left or wait patiently the growth of others suitable for our purposes.  In a bygone day both open forest and a dense jungle furnished useful timbers, either for strength, utility, or ornament.  Cedar, the most valuable of Australian woods, was once abundant, but is now getting scarce ; the grevillea, or silky oak, useful for casks, has disappeared, and many of the valuable scrub timbers have been exterminated in the process of clearing the land for agriculture . . . “

The following bestows a quick insight into the area of the Dundathu Sawmill in the year 1881:

” . . . The banks of the Mary below Maryborough are singularly tame and flat, mangroves and mud, and mud and mangroves, furnishing the only variety until Dundathu is approached, when a few scattered habitations are to be seen.  Then comes the important saw-mill of Dundathu itself, with its cluster of labourers’ cottages and manager’s house on a pretty ridge.  This is the place which mainly produces the oarsmen whose mettle the Brisbane clubs well remember . . . “

Queensland had been proclaimed a colony in 1859.  By the time Boyle Martin and his family had arrived on the shores of Pialba in 1863, The Alienation of Crown Lands Act of 1860 pertaining to ‘Agricultural Reserves’ had been superceeded by the Agricultural Reserves Act of 1863 – which directly affected the new settlers of the new lands.  With the Wide Bay area declared an ‘agricultural reserve’, it meant that early settlers such as Boyle Martin could select a parcel of land and purchase it at a rate of only 20 shillings per acre – to a maximum of 320 acres.  As long as the ‘selector’ complied with the conditions and time-frames dictated in the Act, a Deed of Grant for the land would henceforth be issued.

One can only imagine the fortune Boyle Martin would have enjoyed from timber getting, facilitating the funds to become one of the first to select lands in the region . . .

The following excerpt of a book documenting the history of the area would suggest that Boyle Martin’s farm was situate some three miles (4.83 km) inland:

” . . . But the Pialba of to-day is very much more progressive than in 1870.  Formerly the amusements there were but nominal, and if the visitor was a stranger, the greatest attraction was sea bathing, or gathering shells on the shore.  To the southward and eastward of Walhalla are the late Messrs. Wearin’s and Corser’s selections, the late Mr. E. T. Aldridge’s, Mr. J. E. Brown’s selection, Bulgul Creek, and three miles inland, Mr. B. Martin’s farm.  Of Towzey’s row of cottages, in which many lovers spent their honey-moon, nought but ruins remain.  By the time this book is issued, Pialba will be connected with Maryborough by rail; it is, therefore, imperative it should be more fully described further on.  The branch railway, Colton to Pialba, is sixteen miles forty-seven chains long.  Tenders for its construction were accepted March, 1896.  A level road, good in dry weather and easily travelled, unless the Susan is up, leads from Saltwater Creek (the municipal boundary), to the sandy beaches by the sea . . . “

Boyle Martin was to become a prominent member of the region.  In fact, his property was a landmark: ” . . . his farm being the well-known property on the Pialba side of Scrub Hill, round which the road makes a semi-circle . . . “

In 2015, a very old building surrounded by fields, is situate in the exact location as described in 1921.  It is some 4.6 km from Pialba as ‘the crow flies’.  Could this be the farm of the prominent first settler of ‘Hervey Bay’ ???  It is with urgency that this be clarified, as the farm appears to be under threat of subdivision.  The property is not to be found in the Heritage Listings of the area? . . .  It is with great hope that this historic property be assessed and saved, before it is too late.

Once the timber getting had been exhausted, Boyle Martin turned his had to cattle farming.  He also pioneered sugarcane growing in the district and built a sugarcane mill ” . . . but the venture was not a success . . . “: 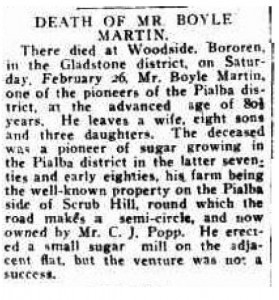 ” . . . Next season some 2 other sugar mills will be erected a little outside the township of Torquay, one of them in all probability by Mr. Boyle Martin . . . “

Boyle Martin later moved away from Pialba – to Bororen, where he continued cattle farming.

– One of the many facilities along the Hervey Bay Esplanade Trail

– Facilities available at Pialba include: