Pialba enjoys some 2.3 km of the Hervey Bay beach front – varying from the sandy beaches of the eastern perimeter, to the the Flying Fox colonies of Tooan Tooan Creek – all the way to the rocky outcrops of the northern edge.

Nowadays, Pialba is purported to be the shopping, cultural and sporting hub of Hervey Bay.

A monument commemorating the landing place of the first European settlers, Boyle Martin, a timber getter, and his family, who arrived on the 30th November 1863.

” . . . Towards the end of the ’60’s Pialba began to grow, the timber industry being then in its heydey.  This part of Queensland was then famous for its kauri, hoop, and cypress pines, ash, and various kinds of hardwoods.  The logs were conveyed to Maryborough and Dundathu (Salt Water Creek) by rafts along the Mary River.  It is on record that Messrs. Boyle, Martin, and Henderson were the first to take up land in this neighbourhood, but it is not certain in what year.  The late Mr. J. E. Brown, father of the well known and respected Maryborough residents, Messrs. Arthur and Frank Brown, must have been one of the first landholders thereabouts . . . “

Once the timber getting drew to a close, agriculture followed.  The entire Wide Bay area had been declared an ‘agricultural reserve‘ restricting the size and terms of acquiring land.  Many ‘selectors’ around the area were Danish immigrants, arriving from 1871 as part of an assisted migration scheme.  Farms in the Pialba area generally grew fruit, maize and potatoes, but struggled until the railway from Colton to Pialba arrived in the December of 1896.

The 1880’s saw sugarcane production introduced into the area.  Boyle Martin was instrumental in the introduction of sugarcane growing on his farm situate on Scrub Hill Road.  He also built a sugarcane mill in 1883.  It was the era where ‘Kanakas‘ were brought from the South Pacific islands to work on the sugar plantations – a sad part of Australian history that is often overlooked . . .  The Pialba district sugar crops fed four small sugar mills which operated within the town until the opening of the railway, when the crops were transported to the the larger mills being:  Maryborough Sugar Factory (commenced as a juice mill in 1886 – relocated & upgraded to sugar mill after major flood of Mary River in 1893 – production started in 1895 & continues until this very day . . . ), Bauple Sugar Mill (commenced in 1896 and operated until 1951), Doolbi Mill (began as a juice mill c 1890 – converted to sugar mill in 1900 – commenced production in 1903 – closed 1924) and Isis Central Mill (the first crush commenced on Tuesday 7 September 1897 & continues until this very day . . . ). 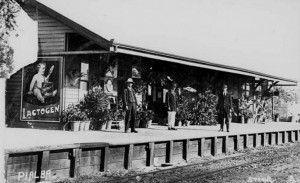 Dairy farming became more prevalent in the early 20th century, as introduced grass species, technological advances and improved transportation networks made the industry more viable.  Pialba, after much ado, received their much needed railway line and station in 1896.  It was extended to Urangan in 1913 in order to service the Urangan Pier.  The railway ran for 97 years, officially closing on the 30th June 1993 . . .

Is situated on the shores of Hervey’s Bay, 26 miles by rail from Maryborough.  In the district coffee culture has been successfully tried by Mr. T. A. Bromiley, and sugarcane by Mr. Stephens, and both without black labor.  As a seaside resort Pialba is a chosen spot, and, under the Burrum Divisional Board, making progress.  Its position, in view of the Mombi Hills on Fraser’s Island to the east, Great and Little Woody Islands to the southward, and Point Vernon, makes it attractive, and it bids fair to become a large and prosperous township.  The scenery is superb, and Sandy Cape, distant 38 miles, is visible in clear weather.  Pialba has a frontage of 13 miles from Eli Creek to Urangan, the whole being available for building sites.  There is the usual State school accommodation, Lutherean and undenominational churches, insurance agencies, post and telegraph office, police force, trade conveniences, with a poulation of about 600 . . .”

The following transcript describes the journey from Maryborough to Pialba prior to the days of the automobile and the railway: ” . . . The late Mr. E. H. Larter, who was head master of the Pialba State School from 1887 until late in the ’90’s, and was well known on the seafront until his death n 1925, contributed an interesting article to “The Queenslander” in 1894 on “A Visit to Pialba ,” illustrated by sketches from his own pen.  In this article he wrote : – “In ‘the good old times’ the journey to Pialba occupied the greater part of a day from Maryborough, being across interminable sandy wastes and through boggy and treacherous creeks.  Then the weary drag through the hot sand and dust was usually relieved by a romantic billy of tea at the Susan and Stockyard Creeks, while not infrequently a knocked-up horse, or the sudden rising of a creek, complied the pleasure-seeker to camp by the wayside, and pass the night in vigorous but vain assault upon innumerable mosquitoes and sand flies.  But the labour involved in getting to the bay was in those days amply rewarded when the coast was at length reached. . . .  Lines of tents crowned the low ridges bordering the beach; visitors dressed, or rather undressed, with the most unconventional absence of style; bathing was indulged in without considering the rigid rules of Mrs. Grundy; each party cooked its own provisions, for servants were non est; while hosts of active blackfellows and merry gins assisted the fishing parties by day and danced weird corroborées by night.” . . . “

Whilst examining a map of Pialba, the extraordinary name of ‘Tooth Street’ captures the attention ??  An article pertaining the region, which was published in the February of 1858, holds the key . . .

Plan your trip to Pialba here

Discover Pialba via POI Australia’s Interactive Map, or, acquaint yourself with Pialba’s

During our visit, we have endeavoured to capture the essence of Pialba and collectively, with our research, have summarised the Points Of Interest (POI) that we have found.