Situate some 20 km (as the crow flies) inland from the coast, the historic township of Childers in Queensland, is beautifully positioned along the ridge of a hill, thereby bestowing the most magnificent views and horizons – every which way one glances . . .  The green pastures; orchards; sugarcane fields – are dispersed across the rolling hills, and then POW !!! – a freshly cultivated field displays the most magnificent rich red soils !!!  The sugarcane railway meanders through the countryside, the Kangaroos abound and quite unusually, but beautifully, many of the fields in the area remain unfenced.

The township of Childers is beautiful.  Large shady trees line the streets.  Historical buildings house the main shopping precinct demonstrating excellent examples of the diverse and beautiful architecture of the various periods of history.  As one wanders through the town, it is quite apparent that many of the buildings tend to be of the early 1900’s era – only a few demonstrate the features of the 1800’s – a little further research and the reason becomes clear – a massive fire took much of the town in 1902 . . .

The pride of the community can be felt everywhere.

This area was once known as the ‘Isis Scrub’, “Scrub” meaning ‘jungle’ in the early days . . .  The scrub once covered some 25,000 acres.  Today, the area is still distinctive due to its rich, red, fertile soil which runs to a depth of some 12 m.  The beautiful soils are purported to be the result of the burning out of a volcano – ‘The Hummock’, located just to the east of Bundaberg, being the crater.  As a result, sugarcane crops have prospered in the area for some 150 years. 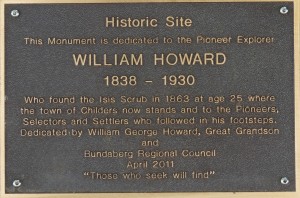 The ‘Isis Scrub’ is reported to have been discovered and explored by William Howard in 1863 – the dense jungle once comprised of Hoop Pine, of which many of the early buildings were constructed.  Pioneer Park is dedicated to the Pioneers, Selectors and Settlers who tamed the land into the agricultural rolling hills we see today..

The land on which the township of Childers is situate was first selected by JE Noakes on the 23rd April 1878, noting that this is the ‘official’ date – often selectors had occupied the land for some 10 years before bureaucracy caught up.

On a journey from Maryborough in the early 1920’s, the following excerpt describes:

” . . . On the way there the train passes over a tract of very poor country and then suddenly it enters an extensive tract of rich, red basaltic soil, identical in quality with that of the Woongarra scrub, but differing from that in being entirely free from stones.   Originally that Childers country was known as the “Isis Scrub,” being covered by a dense jungle, which was left undisturbed in the care of the birds and marsupials until there came the knowledge that the red volcanic scrub soil was among the richest in the State for sugar growing or general agriculture.  The first selectors started clearing and burning off in 1871, and the following year the first cane was planted.  There is a somewhat singular coincidence in the fact the Isis Scrub and the site of Childers are exactly the same height as the summit of the “Hummock” in the Woongarra Scrub.  Each is just 350 ft. above sea level . . . “

As the pioneers moved in and the jungles were converted to agricultural fields, railways began to arrive:

The Childers Railway link was opened on the 3rd October 1887, and from there, a town was born:

” . . . The town of Childers only dates back to 1892.  It was laid out with wide streets, and the main street has a graceful curve and is beautified by avenues of trees on both sides.  The very fertile soil encourages the rapid growth of all vegetation . . . “

” . . . In Childers there are three banks, six hotels, several good stores, a bi-weekly newspaper, motor garages, four churches, a Chamber of Commerce, four clubs, four lodges, two brass bands and two theatres.  All the district is governed by the Isis Shire Council, which includes about 32,000 acres of good soil, of which the best 20,000 acres are under cane.  The population of the Shire represents nearly 6,000 people . . . “

” . . . Far stretching fields of sugar cane extend over the long, graceful undulations of the cultivated red land which was once covered by the Isis Scrub, and cane fields continue for seven miles to Cordalba, on the line to Dallarnil, which is 38 miles beyond Childers . . . ”

The railway was closed in 1964, however, some sections have been retained for the use of transporting sugarcane.

It seems strange that we, as Australians, all flock to the crowded oceans and waterways, when just a few kilometres inland, an absolute gem of a town can be discovered – with scarcely a tourist to be found ?  Childers is an RV friendly town with ample parking for larger rigs.  It attracts many international backpackers for the duration the harvest season . . .

Childers is well worth adding to your travel itinery !!!

Plan your trip to Childers here

Discover Childers via POI Australia’s Interactive Map, or, acquaint yourself with Childers‘

The latest weather for childers

During our visit, we have endeavoured to capture the essence of Childers and collectively, with our research, have summarised the Points Of Interest (POI) that we have found.