Located on the western flank of the Pacific Highway, some 2.2 km north of the Richmond River Bridge, the Rest Area at Wardell in New South Wales provides ample parking, whilst affording an easy: drive-in – parallel park – drive-out scenario. 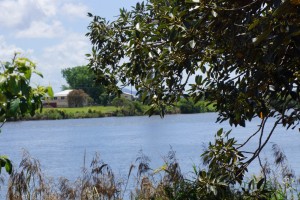 From the township of Broadwater, heading north, the Pacific Highway travels some distance along the Richmond River, until it crosses the river at the township of Wardell – a truly scenic and beautiful part of the drive.

The information signage at the Rest Area provides an insight into some aspects of the history of the area.  It is interesting to discover that the mighty rivers of northern New South Wales were settled almost as soon as they were discovered due to the ‘red gold’ (Australian Red Cedar) that once dominated the landscape:

” . . . The Richmond River was discovered somewhat earlier than the Clarence, but it was not until 1840, that the first squatting station was formed upon it by Messrs. Clay and Stapleton; and in the latter part of 1841 and beginning of 1842, several cedar cutters from the Clarence migrated to that river.  From the Richmond these pioneers of our present civilisation extended their operations to the Tweed River, about the year 1846 . . . “

” . . . The Richmond River is a much smaller river than the Clarence, but is of considerable importance from the extent of navigable waters – the large area of pastoral and agricultural lands – and as supplying an immense quantity of cedar and pine timber to Sydney and Melbourne . . . “

Once the land had been cleared, agriculture subjugated and has endured until this very day . . .

Today, it is impossible to comprehend that the green pastures we see were once expansive rain forests that housed the magnificent giant Red Cedar.  The Wardell Rest Area is just over 2 km north of the township of Wardell, which is set on the northern bank of the Richmond River.   It is situate amidst the shelter of some magnificent trees and provides some amenities including sheltered picnic tables, public toilets, interesting information signage, and rubbish bins.

– Points Of Interest nearby

– Things to Do nearby