The Brunswick Heads Boat Harbour bestows a host of POI’s and Amenities.

Enjoy a walk along the jetty; launch your boat; fish; plan a picnic, or, a stopover whilst enjoying the Walking / Bike Riding Trail . . .

The rugged terrain of the northern coast of NSW proved impenetrable to the pioneers of the early 1800’s.

“Whilst it is to the labours of Captain Cook and Lieut. Flinders that we owe our first authentic knowledge of the great North Coast, it is more to the work of Lieut. Oxley and Admiral Rous that we are indebted for its actual settlement for they were the first to land on our shores and bring back glowing reports of the fertility of the land.  It therefore seems surprising that this vast area of country – approximately 11,000 square miles – embracing one of the most remarkable, most interesting, and most fertile districts of Australia, enriched by the Tweed, Brunswick, Richmond and Clarence Rivers should have remained practically unknown and certainly not settled, for fifty years after the foundation of the Colony of New South Wales in 1788 . . .  “

” . . . The whole of this country was a blank on published maps with the exception of imaginary courses of the Tweed and the Richmond Rivers . . . “

The pioneer ‘cedar-getters’ were the first to settle in the area.  During the 1840’s, the large forests of Australian Red Cedar located along the northern NSW coastal region, attracted the attention of Sydney based timber merchants who fostered the early development of the area.  Red Cedar was to become highly valued, leading to a thriving timber industry.  The cedar getters initially worked from the Brunswick River; where the rainforest Cedar logs were transported via rafts to Brunswick Heads.

Bullocks then hauled the Cedar into the surf, where the logs were winched on board sailing ships.

The sea was the only mode of transporation and communication in those early years . . .

As the region grew, the need for safe harbour for the area became increasingly important.  The unpredictable oceans, the wild weather and occasional cyclones reeked havoc on marine enterprises, travel and structures. The proposed harbour locations were: the Brunswick River at Brunswick Heads, or, Belongil Creek at Byron Bay.

Following the destruction of the seaward end of the Byron Bay jetty during the wild storm of February of 1954, the proposal for the development of a safe boat harbour was at last agreed upon, and actioned. 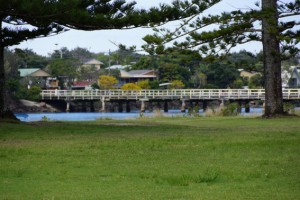 The location was to be at Brunswick Heads.  Almost fifty years after the announcement in the ‘Sydney Morning Herald’ of a new Harbour for Brunswick Heads – works commenced.  A integral part of the harbour project was taming the erratic opening of the Brunswick River to the sea.  With its shifting sands and offshore bars, which had already proven catastrophic to shipping, the river and its entrance needed to be trained and manipulated to ensure safe passage.

Construction of the Brunswick Breakwaters commenced in 1959.

The construction of a wooden road bridge to cross Simpsons Creek commenced in 1960, facilitating the transport of rock to build the southern breakwater.  Today, this very bridge still affords vehicular access to the stunning surf beaches, parks and reserves of Brunswick Heads. 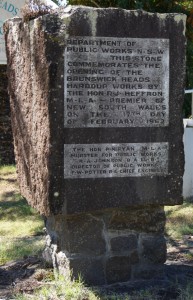 The Brunswick Heads Boat Harbour was opened on the 17th February 1962 by the Hon RJ Heffron MLA, Premier of New South Wales.

However, with all progress there is compromise . . .  The popular sandy beaches that once embraced the heads – the favourite swimming spots – the sandy stretch that once served as a landing strip for joy flights – all are no longer . . .

Today, the popular Brunswick Heads boat harbour provides a sheltered marina including berths for visiting craft, a jetty, fishing co-op, eatery, pathways, seating and garden areas.  The opening to the sea still presents its challenges with boats entering and leaving the harbour to be ever informed and aware of the dangerous bar that will forever remain at the heads of the Brunswick River.

– Facilities available at Brunswick Heads include:

Brunswick River c 1860 – in the background: the ‘Emma’ constructed at Brunswick Heads c 1851