On 19th April 1770, Lieutenant James Cook and the crew of the HMS Endeavour sighted the east coast of New Holland (now known as Australia).

Ten days later they landed in a bay which impressed the ship’s botanist (Sir Joseph Banks) so much that it was aptly named “Botany Bay”  .  It appears that the bay was initially named Stingray Bay as the Admiralty plan and logs refer to Stringray Bay.  It is probable that bay was renamed after the ship had left, and once Banks had had time to examine his collections.

A monument was erected c 1870, marking the southern location of where Cook first landed.  Botany Bay was intended to be the site of the first settlement of convicts, however, upon the arrival of Captain Phillip, on January 18th 1788, he found the site unsuitable to accommodate the size of his settlement.  Whilst on tour to examine Broken Bay, he reconnoitred the area we now know as Port Jackson (named after Sir George Jackson, one of the Secretaries of the Admiralty), and immediately decided on settling there.  Hence, Sydney was founded . . .

Moving back a step – to analyse the significance of this proclamation . . .

In accordance to ‘Terra Nullius’ – international law of the late 18th century, there were only three ways that Britain could take possession of another country:

If the country was uninhabited, Britain could claim and settle that country. In this case, it could claim ownership of the land.

If the country was inhabited, Britain could take over the country by invasion and conquest- in other words, defeat that country in war.  However, even after winning a war, Britain would have to respect the rights of indigenous people.

With this in mind, Lt James Cook received instructions:

” . . . You are also with the Consent of the Natives to take Possession of Convenient Situations in the Country in the Name of the King of Great Britain:  Or:  if you find the Country uninhabited take Possession for his Majesty by setting up Proper Marks and Inscriptions, as first discoverers and possessors. . . . “

The following transcript from Cook’s Journal dated Friday 4th May 1770, clearly states the presence of inhabitants of the land that he described as ‘New Wales East Coast of New Holland‘:

. . . Friday 4   Winds Northerly sereen Wea r, upon my return to the Ship in th[e] evening I found that none of the Natives had appear’d near the Water  g [pla] but about 20 of them had been fishing in their Canoes at no great distan[ce] from us, In the AM as the Wind would not permit us to Sail I sent out so[me] parties into the country to try to form some connections with the Nati[ves] one of the Midshipmen met with a very old man & Woman & 2 small Child[ren] they were close to the Waterside where several more were in there Canoes gather [torn page] of Shell fish & he being alone was afraid to make any stay with the 2 old p [torn page] ple least he should be discover’d by those in the Canoes, he gave them a [torn page] he had Shott which they would not Touch neither did they speak one word but seem’d to be much frightned, they were quite Naked even the Women had nothing to cover her nuditie, Dr. Monkhouse & another Man being in the Woods not far from the water g place discover’d 6 more of t[he] Natives who at first seem’d to wait his coming, but as he was going up to them he had a dart thrown at him out of a Tree which narrowly escaped him, as soon as the fellow had thrown the dart he descended the Tree & made off & with him all the rest & these were all that were met within the Cour[se] of this day – . . . “ 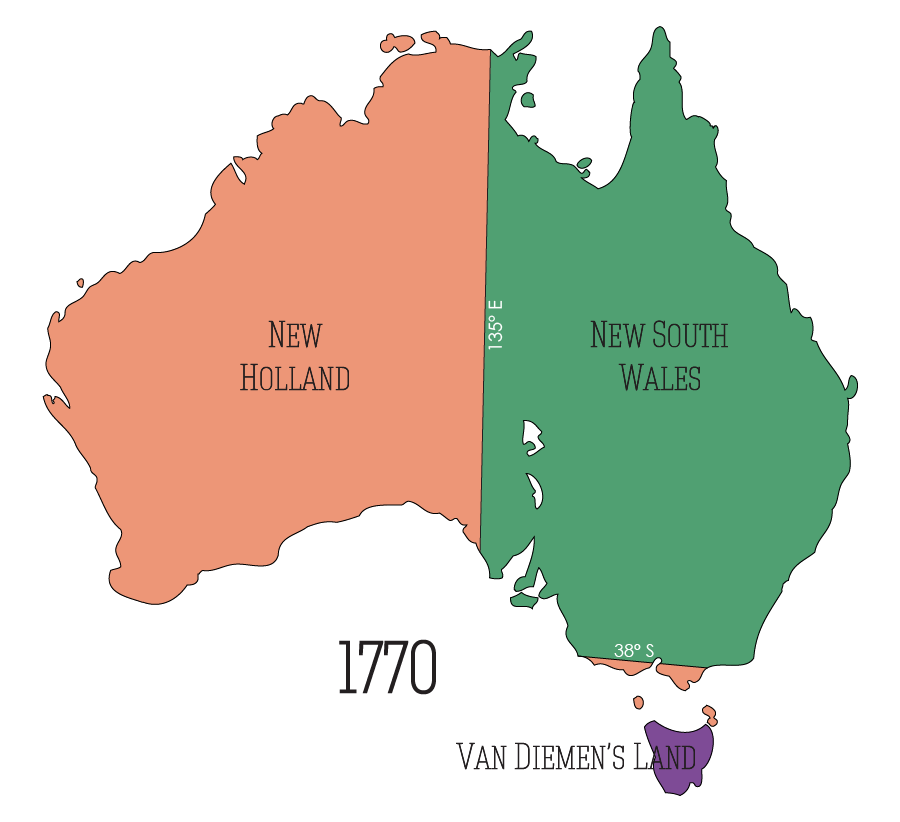 It was therefore, by definition, definitely NOT an uninhabited land.

It was clearly inhabited as is proven by the above excerpt.

However, some four months later, Lieutenant Cook landed on Possession Island in Torres Strait to add the following record to his journal:

” . . . Having satisfied myself of the great Probability of a passage, thro’ which I intend going with the Ship, and therefore may land no more upon this Eastern coast of New Holland, and on the Western side I can make no new discovery, the honour of which belongs to the Dutch Navigators, but the Eastern Coast from the latitude of 38 degrees South down to this place, I am confident, was never seen or Visited by any European before us; and notwithstanding I had in the Name of his Majesty taken possession of several places upon this Coast, I now once More hoisted English Colours, and in the Name of His Majesty King George the Third took possession of the whole Eastern coast from the above latitude down to this place by the Name of New Wales, together with all the Bays, Harbours, Rivers, and Islands, situated upon the said Coast; after which we fired 3 Volleys of small Arms, which were answer’d by the like number from the Ship . . . “

Hence, in contradiction to Terra Nullius, the eastern half of Australia was proclaimed British Territory to the Latitude of 38o S, which, in fact, excluded part of Victoria and Tasmania . . .

The western sector of the continent, from Longitude 135o E, westward and the sector southward of Latitude 38o S, remained “New Holland“, noting that Abel Tasman had named the southern Tasmanian land mass ‘Van Diemen’s Land’ during his voyage of discovery of 1642.  It was not established that Tasmania was an island until George Bass and Matthew Flinders circumnavigated the island in 1798 to 1799 . . .

The reason for the choice of the name “New Wales” will always remain a mystery as Lieutenant Cook did not record an explanation in his journal.  He did, however, amend the name upon his return to England to include the word “South“, hence the colony of “New South Wales” was established.  The Admiralty copy, as well as that belonging to Her Majesty, confirms the name of New South Wales.  The island on which the ceremony was performed, was named on Cook’s chart as Possession Island, and remains so named until this very day.

His journey also proclaimed the islands of the South Pacific Ocean discovered, including Norfolk Island, Fiji and the northern third of New Zealand’s north island.

View other important information on The Evolution of Australia (formally New Holland) . . .