The following excerpt of a transcription of Matthew Flinder’s Journal recording his voyage to Terra Australis in H.M. Ship ‘Norfolk’,  describes his discoveries of Hervey’s Bay, during the period 2nd to 7th August 1799, noting that any explanations added to the original text by the transcriber, are denoted in [brackets]:

The success of this expedition favoured my views of further discovery; and the Reliance not being immediately wanted for service, His Excellency accepted a proposition to explore Glass-house and Hervey’s Bays, two large openings to the northward, of which the entrances only were known.  I had some hope of finding a considerable river discharging itself at one of these openings, and of being able by its means to penetrate further into the interior of the country than had hitherto been effected.

The sloop Norfolk was again allotted to me, with nearly the same volunteer crew as before; and I was accompanied by Mr. S. W. Flinders, a midshipman of the Reliance, and by Bongaree, a native, whose good disposition and manly conduct had attracted my esteem.  Of the assistance of my able friend Bass I was, however, deprived, he having quitted the station soon after our last voyage, to return to England.  The time of my absence was limited by the governor to six weeks, some arrivals being then expected which might call the Reliance into active service. 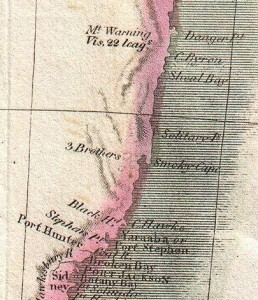 We sailed out of Port Jackson on July 8; and next morning came in with a part of the coast, north of Port Stephens, which captain Cook had passed in the night.* Off a projection which I called Sugar-loaf Point, in latitude 32° 29′, lie two rocks to the south-eastward, at the distances of two and four miles. We passed between these rocks and the point, and kept close in with the shore as far to the north as the hills called Three Brothers by captain Cook, of which the northernmost and highest lies in latitude 31° 43′ south . . .”

” . . . August 2 at noon, the eastern extremity of Sandy Cape bore N. 51° W., six miles, and its latitude was found to be 24° 42′, being three minutes north of its situation by captain Cook. In running northward, within two or three miles of the edge of Break-sea Spit, we had 12 fathoms; and at five o’clock, passed over the end of the spit in 3½; Sandy Cape then bearing S. 9° E. six leagues.  The water deepened almost immediately to more than 17 fathoms; and in keeping close to a south-east wind, up Hervey’s Bay, the depth was from 20 to 14, during the night. On the 3rd, the wind veered to S. S. W; and at noon the anchor was dropped in 17 fathoms, with the extreme of Sandy Cape bearing N. 66° E. seven or eight miles.  The observed latitude was 24° 45 1/3′, and a tide of one mile per hour came from the southward.  A fair wind sprung up in the afternoon, and we ran five leagues by log in a S. by W. direction, anchoring at dusk in 11 fathoms, sandy bottom.

Aug. 4 was employed in beating up along the eastern shore, against a south-west wind.  At three leagues above the anchorage, our progress was stopped by a mass of shoals which seemed to preclude all further access towards the head of the bay on that side.  In the night, we stretched north-westward, to get round them; and in the evening of the 5th, anchored in 5 fathoms, three or four miles from the western shore.

Aug. 6. The wind being off the land, we followed the line of the coast upwards, as close as the shoals would allow; and before noon entered an opening formed by the western shore on one side, and an island of moderate height, three or four miles long, on the other.  The opening was not more than two miles wide, and was still further contracted by a low islet in the middle, surrounded with shallow banks.  There was a large expanse of water above; but we had not advanced two miles before shoal water obliged us to tack; and after having tried for a channel in every direction, without success, I anchored in 3 fathoms, half a mile north-west from the low islet, and landed.

This rocky, sandy spot lies in latitude 25° 17′.  It is much frequented by aquatic birds, particularly by that species whence it obtained the name of Curlew Islet; and since a small shield and three wooden spears were found there, it must also be visited occasionally by men.  The larger island, lying to the east, is richly covered with grass and wood.  Its position is nearly in the middle of the entrance to what may be called the upper bay; and as no deep channel past the island could be found on the west, I determined to try on the east side; having much difficulty in believing, that a piece of water six or seven miles in extent every way, should not have a channel into it sufficiently deep for the Norfolk.

The anchor was weighed soon after four o’clock, and several attempts made to get round the larger island; but being constantly repulsed by shoals, I was at length forced to relinquish the hope of penetrating further up Hervey’s Bay.  We then steered north-westward, to complete the examination of the west side down to the coast seen by captain Cook.

Aug. 7. At daylight, a sloping hummock, in latitude 24° 50′, bore W. 16° N., our distance off the shore under it being one mile and a half, and the depth 7 fathoms.  At nine, the water shoaled suddenly, and obliged us to haul off north-eastward.  The coast was then seen extending to the W. N. W., and having been laid down by captain Cook, the north-eastern course was continued for Break-sea Spit, and the examination of Hervey’s Bay concluded.

This inlet is about fifteen leagues across, from the sloping hummock to the eastern extremity of Sandy Cape, and nearly as much in depth.  The east side is formed by a great sandy peninsula, of which the cape is the northern extremity; but about half way up, there are several white cliffs, and others in the upper bay, which had the appearance of chalk.  The shores at the head and on the west side are more rocky than sandy.  The back land is low for some miles, and not ill covered with grass and wood; it then rises to hills of considerable elevation, amongst which Double Mount was most remarkable.  The smokes in different places bespoke the country to be inhabited in the scanty numbers usual on other parts of the east coast; but none of the people were seen.

Aug. 7, at ten in the evening, we passed the end of Break-sea Spit in 13 fathoms, and hauled up south-east; but the winds were so unfavourable, that on the 14th our latitude was no more than 29° 19′.  I kept the land barely within sight, in order to obtain the greatest advantage from the southwardly current; for, contrary to captain Cook’s observation, it was found to be strongest at the distance of six, and from thence to twenty leagues.  Close in with the shore, more especially in the bights which fall within the general line of the coast, an eddy had been found setting to the northward . . . “

Source:  “A Voyage to Terra Australis undertaken for the purpose of completing the Discovery of that Vast Country and Prosecuted in the Years 1801, 1802 and 1803 in His Majesty’s Ship the Investigator, and subsequently in the Armed Vessel Porpoise and Cumberland Schooner.  With an Account of the Shipwreck of the Porpoise, arrival of the Cumberland at Mauritius, and Imprisonment of the Commander during Six Years and a Half in that Island.  By Matthew Flinders Commander of the Investigator.  In 2 Volumes with an Atlas.  Volume 1.  London:  Printed by W. Bulmer and Co. Cleveland Row, and Published by G. and W. Nicol, Booksellers to His Majesty, Pall-Mall.  1814.

This account of it is respectfully dedicated, by their Lordships’ most obliged, and most obedient humble servant,

It is important to note that Matthew Flinders was the first to complete the circumnavigation of Australia – which he did, returning to Sydney in the June of 1803.  He overcame tremendous challenges including the fact the his ship, the H.M. Ship ‘Investigator’, in which he completed this miraculous feat, leaked and was barely seaworthy, of which he writes many incidents in his journal.

Yet his maps are so incredibly accurate and were used well into the 20th Century.

Sadly, upon his voyage to England, Matthew Flinders was captured and imprisoned by the French at Port Louis, Mauritius on the 17th December 1803 – under the guise of he being a spy.  He remained a prisoner on the island until the 13th June 1810.  The imprisonment took a heavy toll on his health, he returned to England frail and ill – his wife described to a friend he was “worn to a skeleton”.  Miraculously, he managed manage to complete his book, but never saw it in print.  The first copy was delivered to him the day before he died, however he was deeply unconscious by this stage . . .

“The excellence of his charts was such that to this day the Admiralty charts for those portions of the Australian coast where he did original work bear upon them the honoured name of Matthew Flinders; and amongst the seamen who habitually traverse these coasts, no name, not even that of Cook, is so deeply esteemed as his.  Flinders is not a tradition; the navigators of our own time count him a companion of the watch.”