Mangroves are an incredible plant that have managed to adapt to life in soft, salty, saturated soils that contains absolutely no oxygen – an environment that the majority of plant species are just not capable of living in.  Add to this; waves, and tidal fluctuation whereby the plant is subject to large water level changes every day – sometimes dry – other times partly submerged . . .

They have adapted to such a harsh environment by developing above-ground roots.  The roots anchor the plant to the ground as well as deliver oxygen to the roots below the surface – ingenious !!! 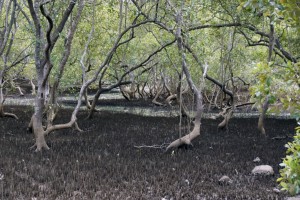 Generally, they feature 2 variations – the ‘Pencil Root’ as exhibited by the ‘Grey Mangrove’ (Avicennia marina); and the ‘Stilt Root’ such as displayed in the Red Mangrove (Rhizophora stylosa).  Their roots have special filters that extract the salt before it enters their root system.  Generally the pencil root species resides in the seaward zone, and the stilt root in the mid zone.

The mangrove leaf is also extraordinary.  Their leathery leaves are designed to cope with the salty environment by reducing water loss, some excreting the salt via glands in their leaves, whilst others store the salt in their leaves which are then dropped from the tree.

Mangrove seeds vary in accordance to the species.  Some are designed to float on the water to be carried long distances – others germinate whilst still attached to the parent tree, dropping into the mud and growing right there, next to the parent.

Mangoves usually grow in large communities and are therefore often referred to as ‘Mangrove Forests’. 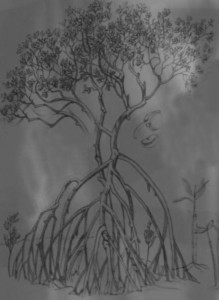 Mangroves are proven to protect coastal areas from erosion, storm surge, and even tsunamis.

Their massive root systems reduce the energy of waves and wind as they approach the shore.  They also slow tidal movement, allowing sediment to be deposited rather than being swept out to sea, thus reducing siltation of the oceans.

They tend to drop a large amount of leaves, twigs, bark, flowers and seeds – approximately one kilogram per square metre, per year. – which, in turn, creates an entire ecosystem for the animal world.  Starting from the microbiological level, the litter is methodically consumed by bacteria and fungi.  These micro-organisms produce waste which, along with the even smaller mangrove litter, is eaten by molluscs, small crustaceans and fish.  Dissolved substances are consumed by plankton, crabs and mud whelks.

Mud crabs and lobsters also consume and mulch large amounts of fallen mangrove litter, and are vital to the recycling of nutrients, in particular nitrogen.  They burrow, thereby improving the penetration of ground water, water from high tides and freshwater runoff aiding in flushing out excess salt and reducing soil salinity.  These burrows also increase oxygen levels in the mud by creating air spaces as well as providing habitats for organisms, including fish, molluscs and worms.  At least 24 species of polychaete worms are known to live in Mangrove mud.

Mangrove forests provide breeding and feeding grounds for fish, prawns, birds and some mammals.  They are the foundation of an important food chain providing food and shelter for young fish and invertebrates.  In fact, some 75% of fish and prawns caught for commercial and recreational purposes in Queensland spend at least part of their life-cycles in mangrove forests.  Mudskippers are one of the few fish which live only within tropical Mangrove shores.

Mangrove roots offer shelter and protection for many young organisms.  Where roots are permanently submerged, algae, barnacles, oysters, sponges, and bryozoans can be found.  Shrimps and mud lobsters use the muddy bottoms as their home, whilst the Mangrove crabs mulch the mangrove leaves, adding nutrients to the mud for other bottom feeders.

Insects are the most diverse and numerous of all animal groups found in Mangrove Forests.

Sea snakes, such as the banded Sea Krait, may visit on high tides whilst land snakes include the File Snake, the Mangrove Snake and the White-bellied Mangrove Snake.  Pythons are attracted, should a large group of Flying Foxes be present.

The Mangrove and Rusty Monitor lizards feed on insects, fish, crabs and birds whilst the Estuarine Crocodile (Crocodylus porosus) is also found in the more northern Mangrove Forests.

Few mammals live permanently in the mangroves apart from the threatened Water Mouse (Xeromys myoides) which burrows in grasses and reeds, building a muddy nest at the base of the Mangrove tree – foraging at night on fish, crabs and worms . . .