This timeline provides an overview of the steamers that traversed the mighty Murray River – through drought and flood, and the infrastructure that supported the river highways . . .

The North Coast Steam Navigation Company operated along the north coast of New South Wales between the years of 1855 to 1954.  Before the introduction of railways and roadways, waterways were the only form of transport and communication.  As the face of travelling the waterways of the world progressed from the sail to steam:  Schooners (sail only), Paddle Steamers (PS), Screw Steamers (SS), Composite Steamers, Turbine Steam Ships (TSS), Steam Ships (SS) – shipping companies needed to progress with the times, updating and maintaining their fleets . . .   During its 99 year history, the company enjoyed a repertoire of some 120 vessels,  – with a further 8 vessels owned in partnership with others . . .

Sailing ships navigated the waterways with such skill and speed, creating maps as they went, discovering new coastlines, rivers, lakes and inland waterways.  However, sailing ships relied on wind, and when the wind died, the ships stopped . . . 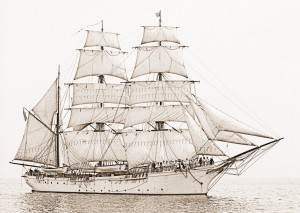