The highly prized Australian Red Cedar (Toona ciliata var. australis) was often referred to as ‘Red Gold’ during the early pioneering years of Australia.  Red Cedar was undoubtedly the most valuable of the timbers found in the coastal brush lands of New South Wales.  Documented as early as 1802:

” . . . In the meantime the Lady Nelson had been to the Hawkesbury and back again, arriving on April 21st and bringing a cargo of wheat and some cedar logs.  The remarks in the log may prove of value to those who study the early history of the Colony, for Murray gives the names of the different reaches in the river, and it would be interesting to know whether these old place-names are still used . . . “

The giant Red Cedars of Australia were magnificent trees – growing up to 60 m tall with girths of up to 11.5 m recorded – literally towering over surrounding trees – usually entangled in vines, which had to be cut away before the trees could be felled.  The base of the giant’s trunk is often buttressed, younger trees are often round.  The largest recorded Red Cedar tree felled in Australia was in 1883.  It came from the Nulla Nulla Creek in the Upper Macleay, New South Wales producing a whopping 240 cu m of timber !!! 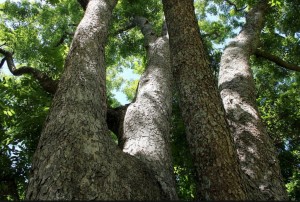 Sadly, one of the few remaining giants, a 500 year old Red Cedar, heritage listed, and located in the Atherton Tableland fell victim to ‘Cyclone Larry’ on the 20th March 2006.  It measured 9.7 m in diameter.

Under the protection of ‘National Parks Australia’, it is rumoured that perhaps a few of these gentle giants may still exist – one of which being reported to be located in New South Wales – measuring in, at a girth of a whopping 11.3 m (c 2007) !!!

Red Cedar is a sub-tropical rainforest tree classified in the Mahogany family.  It is found throughout southern Asia, from Afghanistan to Papua New Guinea and in Australia.   It is a light, fine-grained timber bestowing a beautiful, even, deep-red colour.  The heartwood is naturally durable and easy to work.  In its natural, sub-tropical environment, Red Cedar is actually deciduous, losing it leaves in winter to avoid the ‘dry season’.  It thrives on deep well drained basalt soils usually found along rivers and creeks in areas of high summer rainfall.  It is one of Australia’s few native, deciduous trees.

It was used extensively for furniture, wood panelling and construction, including shipbuilding.

” . . . The history of red cedar is as old as European settlement in Australia.  On arriving at Sydney Cove in 1788 one of the first requirements was to find material suitable for erection of dwellings.  Timber was everywhere to be seen however most was either too tough or misshapen.

According to Alex Gaddes, in his book, Red Cedar, Our Heritage, by December 1788, the colonists had discovered red cedar only 10 km south of the Rose Hill settlement.  The tough eucalypts had proved too difficult to work using the poor quality tools they had been able to bring with them, so the more easily cut and cured cedar was irresistible.

Within two years of settlement plentiful supplies of red cedar were found on the Hawkesbury River north of the settlement and by 1791, pitsawn planks were being sent from the Hawkesbury to England, which resulted in an order from the Admiralty to fill the empty convict ships with red cedar for their return journey.  The first export shipment of red cedar was sent to India in 1795 and by 1801 the ‘cedar cutters’ had reached the Hunter River . . . “

” . . . South of the settlement cedar cutting began in the Shoalhaven River in 1811, and later moved further south into the Illawarra district. . . “

” . . . However, as can be imagined, despite Governor King, in 1802, issuing a general order banning cedar cutting without authority, cedar cutting continued unabated.  It extending up the coast of New South Wales reaching the Tweed River by the 1860’s.  Then into Queensland, and finally reaching the Barron, Daintree and Jonstone rivers in north Queensland by the 1870’s.

Besides the fact that it was one of the best furniture timbers available int he world at the time, red cedar had one tremendous advantage over all other species – and that was that it grew in profusion along the banks of most of the coastal rivers.  Since this was also before the days of overland transport, the logs were simply cut and hauled or rolled into the water, formed into rafts and floated to the river mouth where they could be securely loaded onto coastal clippers and sent by sea to Sydney . . . “

As early as July 1825, a notice published in the ‘Government Gazette’ stated that permission must be obtained from the Colonial Secretary for the cutting down and removal of cedar from “unlocated” ground.  Policing was to be by means of inspecting vessels as they attempted to unload their cargo in Sydney.  The penalty, should evidence of prior permission be absent – the seizure of the entire cargo of Cedar.

This action was interpreted as an exploitation of a few wealthy merchants in Sydney – not as a protection for this valuable and finite resource.  Protests and unemployment forced the relaxation of the laws resulting in the continued heavy and unsustainable cutting of Cedar.

In 1834 an Illawarra correspondent to the Sydney Herald , complained of the disorderly conduct of the cedar thieves, referring to them as “a set of lawless people, addicted to bushranging and cattle stealing”.  Another correspondent claimed that they had “kept the district in a state of drunkenness and iniquity for years.”   The cedar cutters certainly led hard and lonely lives, living with even less comfort than the stockman – plying through the dense forest, physically slaving from dawn til dusk, wet, cold, filthy . . .  They were not popular with the settlers, nor stockmen, who looked upon them as unruly intruders.  Raping the landscape of Red Cedar, above the law, they actually had no rights whatsoever on the land.  To add salt to the wound, as soon as they received their pay, they would usually head straight to the nearest shanty, fill themselves with some sort of rough home brew – resulting in a loud, rude, drunken, unruly and very disorderly scene.

As greed prevailed and without law, let alone respect for this beautiful tree, almost all the large Red Cedar trees had been cut out by the 1890’s – the species was now already, essentially, commercially extinct.

An example of the reported “Colonial Produce” published on the 13th November 1848 in the Sydney Morning Herald, demonstrates the vast amount of cedar being removed from the rainforests of the north-east coast of NSW:

The following articles provide a further insight into the exploitation of the “Red Gold”:

The exploitation of the Red Cedar has rendered the species a rarity.

Attempts to commercially produce Red Cedar have proven to be unsuccessful, as the young Red Cedar requires quite specific conditions in which to grow.  The dark environment of a Rainforest provides these perfect conditions.  When too much light falls on a young cedar tree, it risks an attack by the Cedar Tip Moth (Hypsipyla robusta) – strangely, the tree actually produces a natural chemical that attracts the female moth.  The moth lays its eggs on the tree’s leading shoot – the larvae burrow in to the stem resulting in dieback.  This doesn’t actually kill the tree, however, the damage causes secondary buds to develop, usually behind the leading shoot, resulting in a multi-branched tree – with little commercial value . . .  It is interesting to note that the moth attacks Red Cedar trees in their natural rainforest environment too, however, by this time, the tree has broken through the rainforest canopy.  It is a huge, mature tree which can withstand the moth’s attack.

None of us will see the beauty as described by David Smythe (Smith), one of the earliest cedar-cutters to visit the Illawarra:

” . . . that there was scarcely a creek or stream, valley, ravine or gorge, between Bulli and Broughton Creek, between the sea and the mountains, that was not dotted with cedar trees, many of them of great size and beauty; that in particular the present site of Kiama (then the wild bush) had some noble cedars upon it . . . “