Angus McMillan was born on the 14th August 1810 at Glenbrittle, Isle of Skye, Scotland.

Following an early life of hardship and deprivation, he immigrated to Australia, arriving in New South Wales in the January of 1838.  He carried with him a letter of introduction to Captain Lachlan MacAlister (McAlister), also born in the Isle of Skye.  As a fellow countryman from Skye, MacAlister provided him employment as manager of his Clifton Station near Camden. 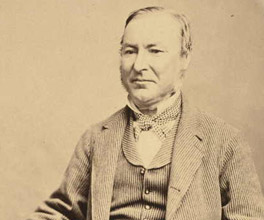 In November 1838, as an employee of the partnership between Captain MacAlister and James MacFarlane, Angus McMillan accompanied Edward Bath to select and transport 500 bullocks from Shoalhaven to Currawang, the journey taking some four months.

Upon his return he was transferred to Currawang in the Maneroo District.

McMillan arrived at Currawang with two convicts and cattle on the 26th  Feb 1839.  There he met James MacFarlane, Lachlan MacAlister’s partner.  With the prolongation of the disastrous drought of 1839, and rumours of prospective new pastures lying south-westward, MacFarlane and MacAlister discuss the prospects of exploring the region that was to become Gippsland, with Walter Mitchell.

The two agree that Mitchell and his party should embark on the journey of exploration.

Mitchell’s party reaches Omeo on their return journey on the 3rd May 1839.  They then head for Currawang.  Upon their return to Currawang, Mitchell informs McMillan of the good nature of the country.

Exploring the lands South-West of Maneroo

McMillan’s first expedition to Gippsland commenced on the 20th May 1839.  Though he was able to manage a glimpse of country that lay southward from a mountain peak located in the Buchan district, he was forced to return as his guide would not proceed any further.  He reported his findings.

He then established a cattle station at ‘Numbla-Munjee’ (in the region now known as Ensay), on the Tambo River, some 80 km south of Omeo, for Lachlan MacAlister, Esq., J.P. and Mr. Buckley on the 16th September 1839.

The next expedition was formed with the intent to explore the low country that McMillan had viewed from the mountain top some seven months earlier.  The party consisting of:  Angus McMillan, Mr Cameron, Matthew MacAlister, Edward Bath and a stockman; departed on the 26th December 1939.  However, within just three days they were forced to turn back due to a devastating accident to one of their horses.

On the 11th of January 1840, the same party with the addition of two Omeo Aborigines, Cobbon Johnny and Boy Friday, departed with the hope of reaching the lowlands of the country lying to the south-west, and, if possible, to travel as far as Port Albert, where Angus McMillan believed an excellent harbour existed.

The expedition ended on the 31st January 1840, having discovered the country of Gippsland as far as the La Trobe River.  It would take McMillan another four attempts to successfully reach Port Albert.  Angus McMillan returned once again to the Maneroo to report his findings to MacAlister.

The following October, saw Angus McMillan arrive in Gippsland with 500 head of cattle.  He established a station on the Avon River for MacAlister, named ‘Boisdale’.  McMillan also secured a run for himself, across the Avon River – named ‘Bushy Park’. The influx of new settlers and the establishment of their runs, was the beginning of the demise of the local Kurnai Aborigine that had inhabited the land for some 40,000 years . . .

Angus McMillan and his men were found to be responsible for countless Aboriginal murders, noting that many of these ‘incidents’ are not on record.  Within the very first year after the establishment of  the ‘Boisdale’ and ‘Bushy Park’ runs, they were responsible for at least:

1841 – Maffra – unknown number shot by Angus McMillan and his men

Though Angus McMillan’s expeditions could not have succeeded without the bush skills he had acquired from the Aborigines; nor for the knowledge, skills and bush craft of his Aboriginal guides, the darker side of McMillan’s settlement in Gippsland was his treatment of the local Aboriginal tribes.  He and his men are reported to be responsible for hundreds of Aboriginal deaths. ” . . . The reason why McMillan had the photograph taken remains obscure but was probably publicity of his work on behalf of the Gippsland Aborigines whilst a member of parliament and afterwards.  During the last ten years of his life he continued to assert himself in local Aboriginal affairs.  Aside from securing the release of the two prisoners, McMillan distributed stores and blankets to the Kurnai, was a local Guardian of them and on the committee to select a site for a mission station in the Sale Maffra district.  Whilst a member of parliament he was on the Select Committee for the Protection of Aborigines but he remained there for less than one year resigning from parliament before the end of 1860.  Thus it seems that the photo was part of a campaign by the McMillan to project himself as a guardian, protector and saviour of the Kurnai.  Unfortunately for him there is substantial evidence that in the early years of European settlement there was a state of extreme hostility between the Kurnai and the Europeans, and that he is implicated in at least three massacres of them.  Perhaps the photo, and the campaign in later years, was meant to hide these distasteful facts of the past?  If so then it has been remarkably successful for the McMillan legend has reached almost heroic proportions amongst Gippslanders today and only a few are aware of the shadier aspects of his career . . . “

Source:  Excerpt – ‘The McMillan Photo: who were the Kurnai with Angus McMillan?‘ – by Peter Gardner c 1980

” . . . He tells of being engaged to reap Mr. McMillan’s harvest at Bushy Park in 1860.  “The terms were £1 an acre,” he says, “and two whiskys a day; but once well started the whisky stopped, so we went on strike until it was forthcoming again.”  Surely this was the first strike in Australia ! . . . “

If settlement and commerce was to be successful, transport by water was mandatory in those days.  Angus McMillan was yet to reach the sea port.  He had accompanied two unsuccessful attempts under leaders appointed by MacAlister.

“I again tried to find my way to the inlet, but was disappointed.  After crossing the La Trobe high up, and getting within sixteen miles of Corner Inlet, we came to a dense scrub, which we found impossible to cut our way through, having lost one of our tomahawks and broken another.”

Finally, on the 13th February 1841, he and Tom MacAlister found the way through the range and reached the port (Port Albert).  He had, at last, successfully marked a track all the way from Port Albert to Ensay, a distance of some 220 km.

In the March of 1840, with Matthew MacAlister as a guide, Strzelecki’s party followed closely behind Angus McMillan, and often in the tracks forged by McMillan’s footsteps.  Strzelecki reported “his” findings to the Governor, Sir George Gipps, making no mention that he had followed another man’s trail.  Though McMillan had named the area “Caledonia Australia”, Strezelecki’s title of “Gipps Land” was adopted in honour of the governor.

The article “Angus McMillan – Discoverer of Gippsland” published in the Gippsland Times on the 6th December 1923, describes the chronology of events.

A rough sketch of the runs occupied around the Gippsland Lakes area around 1844 was completed by Assistant Surveyor, Townsend; and was signed by Commissioner Tyers on the 11th July 1844.

In 1864, Angus McMillan lead the government’s Alpine Expedition to open tracks in the mining areas of Omeo, Dargo and Matlock.  He recruited his party at Stratford.  In the March of 1864, near the Crooked River, his men discovered a rich gold deposit which they named the ‘Pioneer’.  A rush to the area resulted in McMillan losing most of his original party.  Nevertheless, over 354 km of track was cut by the Alpine Expedition in the ensuing twelve months.  The work was arduous and at times McMillan blazed the route crawling on hands and knees, through the thick scrub.

By early 1865 his health deteriorated rapidly.  He could not hold his men and he found the administration arduous.  Details of his expenses were continuously challenged by officials, who were unduly slow in approving wages and provision allowances.  In the May of 1865 the party was disbanded.  Determined to complete his mission, Angus McMillan set out alone.  The final leg of the track from Dargo to the Moroka River would also be his final act.  Disastrously, one of his pack-horses fell and rolled on him causing severe internal injuries.  He set out for Bairnsdale but only reached as far as Iguana Creek, where he died in Gilleo’s Hotel a few hours later, on the 18th May 1865.

Angus McMillan was buried in the Sale cemetery after a Presbyterian service.  He was survived by his wife Christina, née MacDougald, whom he had married in 1857, and, by his two sons, Ewan and Angus.  Though McMillan had blazed the way from the Maneroo to Gippsland, found the trail to the sea port of Port Albert, and had greatly contributed to unlocking Gippsland to the rest of the World, his wife and children were left penniless – a story often repeated in the era of Australia’s founding pioneers.

A month after his death, the government contributed £2,000 for their benefit . . .

View other important information on Founding Pioneers, Governors of Aus . . .